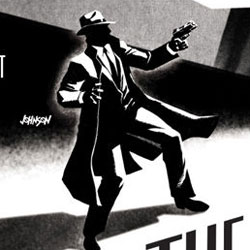 Dark Horse Comics sent Major Spoilers a sneak peek of comics arriving in stores this week. Take the jump for an early look at Buffy the Vampire Slayer #5, Dark Matter #1, House of Night #3, Kull: The Cat and the Skull #4, Lobster Johnson: The Burning Hand #1, The Occultist #3, orchid #4, Star wars: Agent of the Empire – Iron Eclipse #2, Star Wars: Knights of the Old Republic – War #1, and The Strain #2.

Buffy’s dreams have become all too real lately as she deals with a magicless world. She’s still fighting creatures of the night, as Willow and Xander grow distant and nightmares plague the Slayer. But something is telling Buffy that there is more to her dreams than meets the eye . . . and that her greatest fears may yet become reality!

A derelict ship floats in space, its troubled crew awakened from stasis with no memories of who they are or how they got on board. Their search for answers triggers the vessel’s deadly security system: a relentless android bent on their destruction. Facing threats at every turn, they have to work together to survive a voyage charged with vengeance, redemption, betrayals, and hidden secrets best left unknown.

Science-fiction veterans Joseph Mallozzi and Paul Mullie, best known for their work on television’s Stargate franchise and the new Transporter: The Series, create a new and exciting universe!

* Classic science fiction for fans of Aliens, Stargate, and2001: A Space Odyssey

Zoey Redbird and her friends investigate a tale from ancient Greece in their quest through the pages of vampyre history. As the House of Night confronts protests from religious zealots, Zoey hopes that Circe’s famous Full Moon Ritual and her romance with the legendary traveler Odysseus will help her understand her elemental affinity for water and the mysteries she’s encountered as a fledgling vampyre.

KULL: THE CAT AND THE SKULL #4

Beneath the Forbidden Lake, Kull encounters an ancient people enraged at his trespass. In the depths, the truth about the fortune-seeing cat is at last uncovered, but Kull must first survive the fury of the lake men if he is to return to Valusia and face his true enemy, a malignant evil that has orchestrated the entire deception!

When a tribe of phantom Indians start scalping policemen, Hellboy’s crime-fighting hero Lobster Johnson and his allies arrive to take on these foes and their gangster cronies!

* From the pages of Hellboy.

Trapped in another dimension with a deadly assassin, the Occultist must get control over his seemingly unlimited magical powers in order to find a way back to reality, save his girlfriend, and take down the evil demon Swordbreaker.

“The Occultist is a comic you should be checking out.”-Comic Book Resources

When the mysterious warrior Opal establishes a newfound kinship with Orchid, hope for the revolution is rekindled. But will a new enemy quash their efforts before they’ve begun? Learn exactly how stacked the odds are against our unlikely heroes in this game-changing issue!

* Created by Tom Morello, the mind behind the politically fueled music of the Nightwatchman and Rage Against the Machine!
* Each issue features a free musical score from Morello!

Undercover as a diplomatic attaché, Imperial agent Jahan Cross continues his investigation into the stolen droid technology and the mysterious project known as “Iron Eclipse.” At an elegant embassy soirée in the Corporate Sector, Cross locks his sights on the Stark family.

Before the evening is over, more than one player will be out of the game–and Cross will be wanted for murder!

* A view of the Star Wars galaxy from inside the Empire!

If you’ve ever heard of the Knights of the Old Republic video games and comics but didn’t know where to start–this is it!

The Republic and the Mandalorians are at war! Jedi are joining the fight, despite the noninterference stance of the Council. One Jedi, however, has found himself on the front lines against his wishes-the peace-loving Zayne Carrick has been drafted!

* The return of one of the most popular eras inStar Wars video games and comics!

* The perfect entry point into the Star Wars galaxy!

As an eclipse covers New York City in midday darkness, Dr. Ephraim Goodweather and his team from the Centers for Disease Control struggle to find an explanation for what happened to Flight 753. But when the symptoms don’t add up to chemical warfare, and bizarre circumstances unexplained by modern medicine arise, Ephraim begins to entertain the ramblings of a Holocaust survivor who knows too much about this unknown threat.

* Based on the vampire novels from Guillermo del Toro and Chuck Hogan (The Town)!