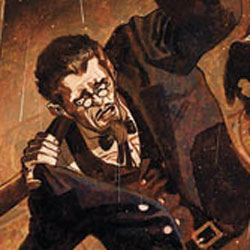 Having defeated slowed the Followers of Cain from taking over Gotham City, there is little to keep Jonah Hex in the city. But Gotham doesn’t seem to want to let Hex go, and Hex is once again in the deep and smelly stuff this issue. Previously in All-Star Western: Though the Followers of Cain seem to have been put down, it’s clear to Jonah Hex that the cult has a foothold in Gotham City, with an early version of a drive by shooting prove the point. Hex is done with the city as soon as he can find the Trapp Brothers, and turn them in for the bounty.

I THINK HE’S GOING TO STICK AROUND FOR A WHILE

We’ve seen Gray and Palmiotti do the wild west thing with Jonah Hex, and now it seems like they want to take the character, and explore what he can do in a more civilized setting. While there were a lot of mixed feelings about bringing Hex to Gotham, so far it has worked out well, and makes sense in this new universe.

This issue finds Jonah Hex taking down the Trapp brothers, and just like the last issue, Gray and Palmiotti transition naturally into a new quest for the western hero. Children have been disappearing all over Gotham for the last couple of years, and when a wealthy man’s son is taken, Hex is happy to take the job, and the $50,000 that goes with retrieving the boy. Before you know it, Hex is reunited with Dr. Arkham and the two are far below the streets of Gotham on the trail of a child slave labor ring.

When the final events are revealed, the writers give us another cliffhanger moment, and the promise of seeing the Batcave in the future. All-Star Western could easily be a Done-in-One series, but by transitioning from one story to another – essentially giving us half of two different stories in each issue, the book feels like a Saturday morning serial, and I like it. Instead of wondering what story arc readers are going to be subjected to next, we know before the end of the issue.

This issue also sees the introduction of The Barbary Ghost, a female Asian vigilante who is set on bringing down the big boss. I love stories set in pre-quake San Francisco, and the one against the mob story gives readers someone to root for. I wasn’t particularly fond of the El Diablo story, but the Barbary Ghost works for me. I’m also a big fan of the back-up story concept, and though it is only eight-pages, is worth the extra money spent on the issue.

This issue certainly doesn’t hold back in getting a Teen Plus rating, as you get to see guys getting their fingers shot off, children malnourished and half dead from being beaten, and of course the filth of walking through the sewers of Gotham City. Moritat continues to do a fantastic job in bringing the Gotham City of 1885 to life showing moments of wonderful Victorian Era architecture with the filth associated with health codes of the same time period.

Phil Winslade does the same thing with the Barbary Ghost, but this time doing it in the more spread out and hilly vistas of Northern California. Winslade doesn’t go a far into the graphic violence as Moritat does, but there are moments where it does get interesting, especially when one realizes that All-Star Western heroes have no problem killing their enemies with extreme prejudice.

Palmiotti and Gray have created a Sherlock Holmes and Dr. Watson relationship with Hex and Dr. Arkham, and though some may criticize the duo for making Hex too much of a detective over a gun and fist fighter, I like this the way they are handling the character this time around. The art is fantastic and the backup story is well worth the price, earning All-Star Western #4 4.5 out of 5 Stars.