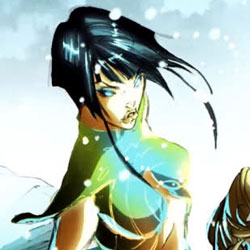 A bevy of beautiful women, Neo-Nazis, and a secret U.S. Government agency all after a crystal skull, and alien artifacts that give the users super powers. This isn’t Danger Girl meets Kingdom of the Crystal Skull by way of The Thing, but it sure feels like it. Previously in Extinction Seed: While this is the first issue, there was a zero issue that provided a lot of needed backstory for this series. Something has been found in the frozen lands of the Antarctic. The US Government doesn’t know what it is, but they do know they don’t want a Neo-Nazi group to have it, and they are willing to send their top agents to get it. Readers are also introduced to Cynthia Morrigan, a photographer that moonlights as a thief. There’s also Cathryn Murphy, an assistant to a high official in Washington, who witnesses a secret test of a new battle suit created from alien technology. And finally, Caroline Moss, who keeps having dreams of monsters attacking her in her sleep. Don’t worry, not every character has the initials C.M.

IT’S ALL IN THE WORDS

We haven’t really covered books from GG Studio, not because we don’t want to, but because the company is very small, they tend to be release issues at random times, and GG Studio’s stuff released in the United States is translated from the original Italian. That being said, if you are thinking of picking up this issue because it has a big number one on it, and you’ve liked all the pretty pictures we’ve shown from GG Studio before, you probably ought take the time and track down the zero issue as well, as that issue is a better #1, and this issue is a better #2.

The issue picks up right after the events of the zero issue, as readers get to see Cynthia Morrigan break into a museum to get an ancient relic for her mysterious client. When she finally makes it to the Bavarian Alps, she is immediately tasked with getting the prize to a new location as the Neo-Nazis have been following her, and want the relic for their evil purposes (taking over the world most likely).

Cathryn Murphy finds herself back at the secret base, where one of the test subjects has flipped her lid, and is trying to break out of the facility with a powerful crystal skull. While Indiana Jones and lead refrigerators are no where to be seen, the test subject does get a bullet in the back of the head causing her to drop the crystal skull, which hits the floor and shatters into a million pieces. Cathryn is caught in the crossfire of flying crystals, one which embeds in her neck, giving her the ability to read people’s minds. She quickly discovers that having these powers is a bad thing, and dons a supersuit of her own to make her escape.

And what of Caroline Moss? She gets kidnapped (probably by Nazis) from her college campus, and is about to be sacrificed on a Mayan alter in the middle of Central America.

There are two big problems with the story being told in this issue. If everything is supposed to take place in 1963, the clothing, technology, and overall style of the world doesn’t seem to align correctly. It feels like a story that is taking place right now, which is fine by me. The other concern is the story feels jumpy, and we’re dropped into the middle of the action without context. Character names aren’t used well, or often enough for the reader to latch on to, and because this is a translation, I’m wondering if something has been lost in the conversion causing the odd story pacing.

The premise and the setup we are given in this issue are certainly understandable if you have read the zero issue, but even if you haven’t, a second (or third) reading, tends to solidify the readers understanding of the bigger story.

One of the things that instantly attracted me to GG Studio was the fantastic art that is packed into every title the company puts out. Each panel feels like a cell from a high end animated movie. There is a ton of detail and color that draws you in, and keeps you transfixed on what is happening in the story. There are a few times the shadows and shading get a bit out of control, almost like someone isn’t paying close attention to the light’s direction, but for the most part, every page is a visual treat.

While I have enjoyed Route Des Maisons Rouges and Mediterranea, I’m a bit more hesitant on this series. I never purchased the zero issue, and the complimentary electronic copy that we did receive from GG Studio arrived way back in July, and was buried under a pile of electrons because we were busy with our San Diego Comic Con coverage at the time. Because the zero issue may not be readily available, I’m tentatively recommending Extinction Seed #1. The art is fantastic, but there is a sense of being thrown in to the deep end of the pool on the first day of swimming lessons when it comes to the story. Extinction Seed #1 earns 3.5 out of 5 Stars.