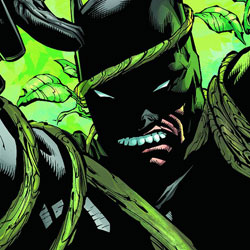 Previously in Batman: The Dark Knight: Villains show up, Batman fights them. There’s a sexy new thing in lingerie and bunny ears, and something’s happened to Poison Ivy.

SOME OLD SONG AND DANCE

Though I haven’t been reading comics for 90 years, when it comes to Batman, I’ve read nearly all of them, and though it can be difficult to remain fresh, when a story feels like it is a rehash of something else, it becomes frustrating to read. This is how I feel when I picked up this issue of Batman: The Dark Knight. There is simply more of the same – Batman follows the clues that points to Poison Ivy in trouble somewhere on a swamp island we’ve never heard of (in this universe), and while flying there, is attacked out of nowhere by Deathstroke, who uses his big blade to slice the Batplane in half – IN HALF! And then of course The Scarecrow shows up. There’s not even a lot of sense in the sky battle, the clues being left behind, or the seeming random way the villains keep showing up with visible signs of being on all-natural creatine.

I don’t want to crap all over what Finch and Jenkins have put together, but this series so far feels like two super-fans sitting in the garage coming up with the best Batman fight scenes ever, then trying to connect those big splashy scenes with something that doesn’t seem thought out. Don’t believe me? How does a scene of Batman eating a pistachio (or mint) ice cream cone sound to you?

AT LEAST THE ART IS PRETTY

One thing I do love about this issue is the art. Yes, the jacked up villains look odd, but that’s what happens when you juice, I guess. I like Finch’s Batplane design, and though the White Rabbit villain doesn’t make a lot of sense at the moment, at least Finch knows how to make the costume, or lack there-of, interesting.

So far, Batman: The Dark Knight feels a lot like Hush, but not in a good way. My interest level for each successive issue continues to diminish, and if it wasn’t for Detective Comics, this would be the Batman book at the bottom of the stack. The art is pretty to look at this go around, but the story is a jumble of scenes that don’t connect well. Unless you’re dying for something with Batman in it, I say pass on this issue. Batman: The Dark Knight #4 earns 1.5 out of 5 Stars.