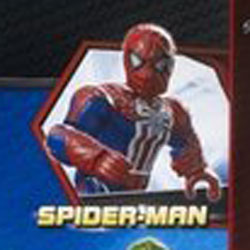 MegaBlocks, that other building block toy, has released product information for its The Amazing Spider-Man playset, and the company may have spoiled a big scene from the upcoming movie.

Take a close look at the packaging and you’ll see The Lizard and Spider-Man battling in the Oscorp Tower FX Battle set.  A closer inspection shows that there is at least one S.W.A.T. Lizard character joining in on the action, which implies that Dr. Connors may be able to transform anyone into his minions.