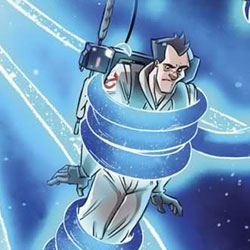 Gozer is coming back to destroy Earth, and the Ghostbusters have read a prophecy depicting their demise. Who will arise from stickiness of battle as the victor? Previously in Ghostbusters: Ray Stantz has been taken captive by a new minion of Gozer, the Ghostbusters’ foe circa 1984, and is again being forced to choose how the Earth will be destroyed. Peter, Winston, and Egon are reading the newly formed information about Idulnas so they can save Ray, New York City, and planet Earth.

In the previous issue of Ghostbusters we were left with the prophetic image of all four Ghostbusters impaled and hanging from demonic tress with Idulnas in the background. With ending imagery like this, and Peter, Egon, and Winston repelling down into battle commando style, I’m expecting a multi-page, cage match like fight to take place this go around.

But sadly this is not what happens.

Once Ray is called upon to choose the form of the Destructor, and once again creates a giant Stay Puft marshmallow monster, Idulnas simply vanishes into another dimension without so much as a single proton blast. But there is still the matter of destroying the Stay Puft monster, which would prove to take more effort to defeat than the evil force that ushered it in. After a few blasts, and Ray deploying his newly created Mega Trap, yes that is its name, Stay Puft is blown to gooey bits spread across the city.

Maybe my reading of the men in spandex has predisposed me to expect a fast, blurry, colorful fight in the defeat of the enemy, but the ending of this initial arc left me slightly disappointed. What did work for me was the continuing use of wit and humor that each character brings to the book, an aspect that was important in creating this movie-to-comic adaptation.

Attached with the rights to the Ghostbusters property must be the likeness to all characters because Dan Schoening’s drawings are a mirror image of actors from the movie franchise. His ability to draw the main characters with such accuracy makes this series more enjoyable for a fan of the movies. And even though I just complained about the lack of overall action in this book, Schoening keeps the book driving with action in his art and page layouts.

Even though this issue was not what I had hoped for, this first arc was a great first step for this ongoing series. Erick Burnham is capturing the tone from the movies and Dan Schoening is delivering art to push the story even further along. Ghostbusters is a title that the old fan and new reader can both sit down and enjoy. All things considered, Ghostbusters #4 was just a decent ending to a greater arc earning 3 out of 5 Stars.