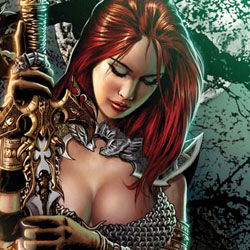 Dynamite Entertainment sent Major Spoilers a sneak peek of Kirby: Genesis – Captain Victory #2, Red Sonja #61, George R. R. Martin’s A Game of Thrones #4, Warlord of Mars #14, Robert Jordan’s Wheel of Time: The Eye of the World #18, and more, that you can check out, after the jump.

KIRBY: GENESIS – CAPTAIN VICTORY #2
32 pages FC • $3.99 • Teen +
Plot by ALEX ROSS, STERLING GATES
Script by STERLING GATES
Art by WAGNER REIS
Covers by ALEX ROSS (main), MICHAEL AVON OEMING (1-in-10)
“Negative Effect Art” Retailer Incentive cover by ALEX ROSS
“Black & White” Retailer Incentive cover by MICHAEL AVON OEMING
“Virgin Art” Retailer Incentive cover by ALEX ROSS
Jack Kirby’s epic space opera continues! Last issue, Captain Victory was forced to make a terrible choice in order to stop the malicious Batteron. Now that decision comes back to haunt him as several members of his crew plot mutiny. As tempers flare, however, the ship is attacked by the Eye of Blackmass, punching a hole in the ship’s hull that threatens to kill everyone aboard! Is it still mutiny if Captain Victory is dead? Plus, the secret origin of everyone’s favorite lion-man, Tarin!

GEORGE R.R. MARTIN’S A GAME OF THRONES #4
32 pages FC • $3.99 • Mature
Written by GEORGE R.R MARTIN
Adapted by DANIEL ABRAHAM
Art by TOMMY PATTERSON
Cover by MIKE S. MILLER
“Virgin Art” Retailer incentive cover by MIKE S. MILLER
“Black & White” Retailer incentive cover by MIKE S. MILLER
Death comes to Winterfell in the fourth installment of Daniel Abraham’s thrilling adaptation of George R. R. Martin’s fantasy masterwork A Game of Thrones. Bran Stark lies broken, in a coma from which he may never awaken. Yet his would-be killers dare not leave his death to chance. And now is the time to strike. Bran’s father, Eddard Stark, has left for King’s Landing to serve as the Hand of the King. Bran’s bastard brother, Jon Snow, rides north to join the brotherhood of the Night’s Watch. Robb, his trueborn brother, has all of Winterfell in his charge. And his mother, Catelyn, is worn out with grieving. Who can protect the young lord?

WARLORD OF MARS #14
32 pages FC • $3.99 • Mature
Written by ARVID NELSON
Art by EDGAR SALAZAR
Covers by JOE JUSKO (50%), STEPHEN SADOWSKI (50%),
LUCIO PARRILLO (1-in-15)
“Risqué Art” Retailer incentive cover by ALÉ GARZA
“Martian Red” Retailer incentive cover by STEPHEN SADOWSKI
John Carter learns the shocking truth about the therns, the mysterious sect of priests who control the worship of Issus, the goddess of all Mars. He and Tars Tarkas, the greatest warrior of the green Martians, will have to battle their way through the hellish labyrinth of the therns’ temples before they can tell anyone about their discovery. Fortunately for them, they’ll have the help of Thuvia, Princess of Ptarth. But even if they free themselves from the temples, they’ll have another, even more deadly threat to contend with: an ancient terror from Mars’s larger moon…

Kato travels to New York, and the infamous Hellfire Club, to sniff out a story for the Sentinel. Kato goes undercover as a Siamese prince to unearth an illegal business collusion from some of the East Coast’s richest families, but when a prominent businessman is murdered in a closed room, everyone becomes a suspect. This looks like a job for a ninja crime fighter!

Collection Features:
• Issues six through eleven of the critically-acclaimed series by Jai Nitz and Colton Worley
• All of the series covers by Colton Worley and Francesco Francavilla (Man Without Fear)

“Do yourself a favor and pick it up. Gritty action. Noir setting. Sophisticated, ambiguous view point. Ass-kicking ninja. Dynamite just locked in my money.” – weeklycomicbookreview.com

“…a good, mystery filled story that is worth the buy if you’re a longtime Hornet fan or, like me, just curious about the character known as Kato.” – Troy mayes, blogcritics.org

TOM ZAREK
Tom Zarek was a political activist for more than 30 years before the Fall of the Twelve Colonies — a charismatic, eloquent and ideological political agitator who was incarcerated for destroying a government building on Sagittaron. His incarceration culminated in a trip on the Astral Queen, a FTL-capable prison ship; Zarek was under consideration for parole at the time of the Cylon attack.

GAIUS BALTAR
Gaius Baltar is to become both a brilliant scientist and the architect of humanity’s downfall at the hands of the Cylons. From his humble beginnings on Aerilon, to his rise to power within the Colonial Ministry of Defense in the days leading up to the Apocalypse.

WILLIAM ADAMA
William Adama began his military life in the cockpit of a Colonial Viper during the first Cylon War, and would end up as Commander of the Battlestar
Galactica during the Second Cylon War, as humanity fled the Cylons. His dedication to the Colonial Military cost him a marriage and his sons.

STARBUCK AND HELO
From her early days on the pyramid court to her military training and her eventual position as a flight instructor and viper pilot, Kara Thrace – callsign Starbuck – has left an indelible mark on all those around her.

Karl Agathon – callsign Helo – would go on to serve with honor aboard the Battlestar Galactica, but in his early days, he shared the court and the skies with Kara Thrace.

THESE ARE THEIR STORIES…