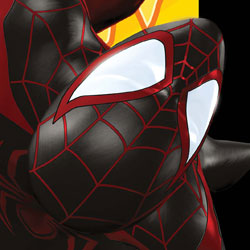 Miles Morales is in big trouble. First he decided to dress up as Spider-Man and swing around NYC (too soon, man… too soon). Then he comes face to face with Spider-Woman, and decides to give her lip. How does this lead to the black costume? It’s answered in this issue. Previously in Ultimate Comics All-New Spider-Man: Miles Morales has been bitten by a radioactive spider that came from the same batch that gave Peter Parker his powers. Upon the death of Spider-Man, Miles thinks it’s a good idea to get a store bought Spider-Man costume and honor the fallen hero. It’s just too bad everyone else thinks his homage is in bad taste.

For those who don’t remember, Spider-Woman is a clone of Peter Parker, so she knows just about everything Peter knew, but the one thing she wants to know right now, is how Miles got his powers. A bit freaked out, and still trying to get his own powers in check, leads to Miles getting knocked out, and waking up in the Triskelion – Ultimates HQ. There he’s confronted by Super-Woman, Nick Fury, Havoc, and Iron Man, and Fury pretty much figures Miles’ story out. Or at least pieces it together.

For the fifth issue, Bendis spends a lot of time restating nearly everything readers of the series already know, and that is a shame – unless Bendis and Marvel are hoping this is a great jumping on point for new readers, in which case, there are a few holes left in the story, but nothing that would throw the new reader off. In his depiction of Fury, Bendis writes the leader as someone who sees a chance at redemption – a chance to fix everything he failed to do with Peter Parker. Of course before all of that can come out, Electro escapes his confines, and wrecks havoc on the facility.

Even though Electro is able to take down Iron Man, Spider-Woman, Hawkeye, and all the other guys with guns walking around the place, it’s Miles who is able to bring down Electro with his Vulcan Nerve Pinch, also known as his venom blast. It’s enough to give Fury pause and give Miles one chance to prove himself a hero, but before he makes another superhero social faux pas, the Ultimates give Miles the black Spider-Man costume we’ve seen splashed across the Internet since news broke there was going to be a new Spider-Man.

It’s been a while since I’ve really read this series, but it seems like it has taken a long time for Bendis to get to this point, as the decompressed storytelling is really apparent this time around. Not that this chapter is bad, it simply feels like a third issue instead of a fifth.

Sara Pichelli does a great job with the art, and I’m really glad we’ve moved away from the manga style that appeared at the end of the last series. However, the one thing that seems odd is the random use of screentone/zipatone used to color the background. If the colorist wants to continue to use this, I’d suggest using it all the time instead of scattered throughout the issue because it does nothing but to distract the reader away from the foreground art when it is used. There are some very good pages, and the final splash page is wonderful, but there seems to be a weird randomness in the overall coloring of the issue.

There seems to be a slower than normal burn going on in the Ultimate Comics universe, and the once mighty Ultimate Spider-Man seems to have lost some of its footing. Though sales remain strong, if the story pace doesn’t pick up a bit, I fear the series will continue to slide. I like Miles as a character, and hope he finds his direction soon, and it looks like we will with the semi-conclusion to this arc. There seemed to be some tire-spinning in the repetition of information readers are already familiar with, so it’s not going to kill you if you miss this issue. Overall, Ultimate Comics All-New Spider-Man #5 is an okay read for me, earning 3.5 out of 5 Stars.