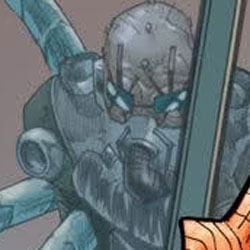 While the cover may say the bad guys will win if you don’t read this comic, the reality is, by the end of the issue, the bad guys do win. Previously in The Amazing Spider-Man: Now that the events of Spider-Island are over, and everyone is back to normal, it’s time for some of the biggest and baddest villains in Spider-Man’s past to resurface. First it was The Vulture leading a group of high-tech thieves, and when he is taken down, the door is open for something sinister to appear.

There are two things you need to know about this issue – first, Spider-Man only appears on the cover of this issue. Dan Slott doesn’t give him any quippy one-liners, wall-crawling action, or awkward romance moments. Instead, this issue focuses on two groups of super-villains and the all out gang war that occurs at the North Pole.

The second thing you need to know about this issue is to never piss off Doc Ock. The two groups of villains that appear in this issue are the Intelligencia, a group of super-geniuses devoted to proving themselves the smartest of all the smarty-pants on the planet, and The Sinister Six. Sure, the Sinister Six is made up of some of the original members, but instead of going after Spider-Man directly, Doctor Octopus decides to prove once and for all who the smartest and wickedest villain of them all by attacking the Intelligencia and their Zero Canon.

It seems in every group, there is one person who perceives she is bigger and better than the rest. Though she may be, her actions tend to put others off so much, and when that person isn’t invited to join the group, the blowhard makes a big stink, and goes over to the corner to sulk until she can hatch an evil scheme of evil. And though Doc Ock claims his take down of the Intelligencia is for reasons beyond the comprehension of the other members of the Sinister Six, it really boils down to a bruised ego and the desire to put MODOK and the rest of the smart kids in their places. And that place is outer space.

This issue is an all out brawl for the belt, which means there is a lot of fighting and killing going on. The Intelligencia’s Zero Canon is able to pinpoint any place on the planet and send anything at those coordinates into exosphere. Now I don’t know what everyone’s powers are, but when The Winter Guard, Red Ghost, Mad Think, the Wizard, and the Klaw are all sent skyward, I’m guessing they aren’t able to generate their own oxygen supply. In the course of one issue, Dan Slott is able to remove eight characters from the Marvel playing field… until the Revolving Door or Death allows them back in.

I’m not sure how all of this is going to affect Spider-Man when the Sinister Six finally attack, but by taking out the enemy, the ultimate downfall of the wall-crawler will be truly the achievement of this group of bad guys.

There is a lot of crazy chaos going on in this issue, yet Humberto Ramos is able to keep it all in check. While other fights will quickly turn into a mess of arms and legs, and claws and tentacles, Ramos’ layouts let the reader see all the action, and catch the subtle movement going on in the panel. The only time things get a tad confusing is when the Zero Canon is fired, and one or two of the characters is lost in a flash of green light.

BOTTOM LINE: GOOD EVEN WITHOUT SPIDER-MAN

I was really expecting to see Peter Parker in this issue, and was disappointed about halfway through when it was clear he wasn’t going to appear. That being said, by the end of the issue, I had a better appreciation for what is currently driving Doctor Octopus and the rest of the Sinister Six to be the big bads on the block. Dan Slott continues to tell fantastic tales, and Humberto Ramos dazzles me with his art style, earning The Amazing Spider-Man #676 4.5 out of 5 Stars.