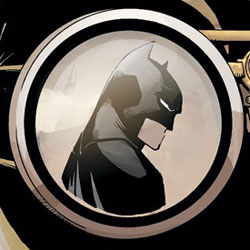 The Court of Owls supposedly has been pulling strings, and killing people in and around Gotham for centuries, which is odd, because we haven’t heard about them until now. Previously in Batman: Upon discovering secret lairs all across Gotham AND in Wayne buildings, the threat of the Court of Owls suddenly becomes a reality for Batman, as he trips a wire, and the whole floor blows up.

Of course if the building blew up and Batman died, this issue would be more hyped, and it probably would have happened a couple of years ago. OF COURSE BATMAN IS GOING TO ESCAPE! Back in the Batcave, Bruce relays to Dick that he doesn’t believe the Court of Owls is real, because when he was a kid he investigated the death of his parents, believing the Court of Owls was behind it.

Yes, it is an interesting story, as Bruce looks for conspiracy behind each and every corner, and yes, it does potentially set up the drive and desire for Bruce to become Batman, but do we really need another “My Parents are Dead!” hook that retcons, reimagines, and reinterprets everything the Waynes were about? It’s a story that doesn’t feel right, even during a company wide relaunch. That aside, Snyder does pace the story very well, and even though most of it is inner monologue, the detective part of the issue still comes through, which send Batman to the sewers where he comes face to virtual face with the Court of Owls, and whatever dastardly plot they have planned for the hero.

With all the action (and inaction) going on in the issue, Greg Capullo continues to deliver some stunning art. Whether it is Batman escaping a secret lair that is blowing up around him, or Dick being flippant with Bruce, as the duo discuss the merit of the Court of Owls, each panel is wonderfully drawn. Lots of detail to draw you into the imaginary world, and the colors by FCO make it pop on the page.

If there is one thing that bothers me the most about the art it’s the eyes. Sure, a lot of people complain about the noses on the characters, but for me, the eyes seem a little too big and in the case of Bruce, really, really blue. A minor issue in an otherwise great issue.

Batman is still the best Batman book DC is putting out, even though there are some problems with dredging up the death of the Waynes as the major hook for the issue. The art is still full of detail and the story moves at a good pace, which earns Batman #4 3.5 out of 5 Stars.