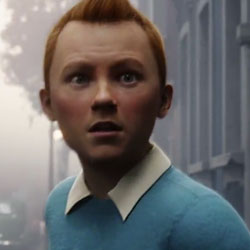 REVIEW: The Adventures of Tintin

When it comes to adaptations, there are two ways you can go about it – a really good adaptation, or a really bad one. In the case of The Adventures of Tintin, Steven Spielberg and Peter Jackson have done something quite different – done an adaptation that is better than the source material. Synopsis
Tintin and Captain Haddock set off on a treasure hunt for a sunken ship commanded by Haddock’s ancestor. But someone else is in search of the ship.

For a couple of years now, I’ve had the complete Tintin collection in my Nerd Room of Doom, but save for Cigars of the Pharos that we reviewed on the podcast, I’ve done little with those books until now. For those wondering, yes, Herge did have an adventure called The Secret of the Unicorn, but to fully understand where Steven Moffat, Edgar Wright, and Joe Cornish got the full story, one needs to also include Red Rackham’s Treasure, the volume immediately following The Secret of the Unicorn. The Secret of the Unicorn sets up the premise of the three ships, Haddocks’ ancestry, and the lure of treasure, while Red Rackham’s Treasure finds the adventurers looking for the lost ship, includes the Marlinspike Hall device, and the ending treasure reveal. For the movie, the writers have taken the best of both books, and have thrown in some great chase scenes (one of them rivaling Spielberg’s own Chasing the Ark sequence from Raiders), a few twists (Haddock and Tintin have never met before), and best of all, an adventure that is a roller coaster ride of fun from start to finish. While there have been some refinements and tweaks to the source material, the major plot elements are still present, and if you watch the movie and then read the two books, you’ll see dialogue lifted right from Herge’s work, which is really very nice. Also be on the lookout for references to Herge, other Tintin adventures, and more.  With the creative minds behind Doctor Who, the film adaptation of Scott Pilgrim, and the writer of Attack the Block, it is impossible to deliver a story that is anything less that stellar.

Billy Elliot and Jumper star, Jamie Bell delivers a spectacular performance as Tintin, and from the moment I heard Bell’s voice come from the title character, I knew the casting directors had done their jobs. The wonder and excitement Bell brings to the character makes the spectacle of the adventure that much more grand. The great acting doesn’t stop there; Andy Serkis, who most audiences will know as Gollum from The Lord of the Rings, really understands how motion capture works, and brings Captain Haddock to life on the screen. Daniel Craig plays the villain so well, that even though there is a bit of scenery chewing in the third act, it makes the action that much more enjoyable to watch. And though they have little screen time in this installment of the Tintin series, Simon Pegg and Nick Frost are hysterical as the bumbling Thompson and Thomson.

When Spielberg and Jackson said they were going to make this movie as photorealistic as possible, I feared that the Uncanny Valley would distract too much from the story. Final Fantasy: The Spirits Within didn’t bother me all that much, but knowing that mocap technology, and rendering capabilities had improved dramatically in the last decade, I feared the worst – Polar Express kind of worst… Fortunately, by keeping the characters in the Herge style, and putting them in a setting that pushed the limits of realism, the magical wonder of the world of Tintin was secured. There were a few times where facial expressions didn’t go as far as they could have, but there was never a time that the acting looked odd. I really don’t like going to the movies these days, simply because of the crowds, noise, and theater environment isn’t what it was fifteen years ago. Fortunately, my four year old son and I were the only ones in the theater during the early morning screening, so not only did it feel like an exclusive showing just for us, we could both concentrate on, and enjoy, the story. At one hour and forty minutes, the movie was a tad too long for the really young people in the audience, but for me, it was just right. Though we didn’t have anyone else in our screening, I hopeful that word will spread like wildfire across the United States, as people really need to be introduced to this character.  There are few moments that parents of younger kids might be concerned with, but it isn’t anything worse that what you see on Prime Time television.  There is a great story in this movie, and coupled with fantastic acting and animation, The Adventures of Tintin is a must see movie, earning 5 out of 5 Stars.