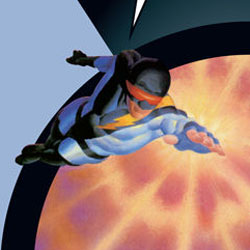 The fan-favorite title returns with its team of creators, Mike Baron (The Badger) and Steve Rude (The Moth), in their respective positions of writer and artist! Baron and Rude created Nexus in 1981 and have been continuing their canonical tale for thirty years. The Eisner Award winners will craft a brand-new three-part story for readers eager to quench their thirst for what’s next to come in the Nexusverse.

“Nexus has never been a stranger to different publishers. Last seen under the Rude Dude banner in 2009, Nexus has stayed in limbo, never quite knowing when to return, or if he ever would return. Things come together in strange ways. With the backing of Mike Richardson of Dark Horse Comics, Nexus will return to comics,” Steve Rude said. “We especially look forward to the response of Nexus’s devoted fans, and thank them for the wonderful support and encouragement they’ve given us since the book’s debut in 1981!”