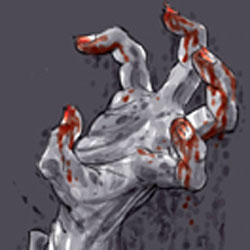 The classic radio show of the forties and fifties comes back to life under the able pen of veteran comics artist Ernie Colón. Presented as they were in those storied days of radio, thus happening in that time period, it is as if watching classic movies of the day in black & white. Good old fashioned horror and suspense.

To quote Colón himself, listing the favorites he has adapted in the book:

“The lights had to be out—complete darkness, ear pressed against the set. Raymond [the show host], with his insane laughter, would introduce the story, first bantering with the tea lady selling Lipton’s. I backed away from the commercials, not wanting to break the spell that was already settling over me, of anticipation. Then back to mad Raymond. What was the story tonight—“The Horla”? Where a concert pianist hears and sees a grotesque monster in his own penthouse home? Or “Alive in the Grave,” a horror tale of a man possibly buried alive. Maybe “Death of a Doll” about a possessed child’s toy, perhaps possessing whoever touched it. Or, one of my favorites, “The Undead”, a man who wants to be a vampire!
This was the time of “Cat People”, the movie that relied on the power of suggestion, rather than in your face graphic monsters. Those lucky enough to have seen this little masterpiece will remember that the monster—in this case a woman who turns into a panther—is never actually seen doing so. But the chills are there—in your mind—as you fill in the deliberate spaces the director (Jacques Tourneur) has structured for your head.”

And Colón adds one of his own making:
“Then, my own story—which would have been perfect for “Inner Sanctum” (I modestly believe)— “Mentalo”, about a magician who does…real magic.” What might be especially strange about this one is the page right after (p.64). He has offered no explanation for it, it is up to us to interpret…

Colón needs little introduction to those who know their comics. It is a long and extremely versatile career, from Casper and Richie Rich to Conan the Barbarian and most recently the bestselling 9/11 Commission Report, the Graphic Novel to The Diary of Anne Frank graphic novelization. As he so sweetly says in his bio: “Working with NBM’s Terry Nantier and his mob is a long overdue wish come true.” We are proud to welcome him.