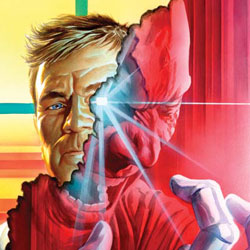 Steve Austin goes on his first mission, and it is anything by easy. Kevin Smith and Phil Hester continue to spin the tale of The Bionic Man 2.0.

Previously in The Bionic Man: Having given permission to have his body transformed to something more than just a man, Steve Austin took his body out for a spin and liked what he discovered.

TIME FOR A MISSION

With the rogue bionic man still running around, OSI sends Steve on a simple spy mission to infiltrate a Russian robotics mogul, who they believe will lead them to the subject they seek. Last issue, readers got to see Steve Austin testing out the big power items in his arsenal, and this issue we get to see how his other gadgetry works. During his infiltration mission, Austin uses his body morphing capabilities to mimic a close aid to the Russian, jack in to a computer, and send the content wirelessly to OSI headquarters.

If that sounds too boring, that’s okay because the tale does have a lot of the punchy-punchy and fighty-fighty brought on when the rogue bionic man appears and punches his bionic hand through the chest of the Russian mogul… and we get to see it in its bloody gory right there on the page. There are a few more blood splatters on the screen as all hell breaks loose in a crowded ballroom, as our hero decides to confront the killer. Readers are then presented with eight pages of bionic on bionic rage, as Austin tries, and fails to stop his predecessor.

While the opening act of this series started off rather slow, the last couple of issues brought the action and adventure those of us who watched the series in the ‘70s remember. I like how Hester and Smith have brought the Bionic Man into the 21st century, without making the gimmicks too far over the top.

If the writers are going to write some hi-tech elements into the story, the artist better be able to make it happen and make it believable, and that’s exactly what Jonathan Lau does here. I love how the face mimic gag plays out, and when the action heats up, seeing a one ton bionic man jump a number of stories down to the ground floor in a mighty way is spectacular. I’m not a big fan of blood and guts simply for shock value, but it does end up working this time to once again reinforce that the enemy is not someone to be trifled with.

BOTTOM LINE: WHY DID HOLLYWOOD PASS ON THIS AGAIN?

Smith pitched this script and plot to H’wood executives way back in 1996, and though he does have a core audience, I understand why many suits would pass on anything with his name on it. That’s why Hollywood is in the shape it is these days – granted, I’m not a big fan of cheap remakes, and hustling stuff from forty years ago and trying to pass it off to the next generation, but in this case, I think an exception could be made. The story doesn’t pander to hard core fans, and it doesn’t try to bring the funny-ha-ha and spoof the source material. This is an action adventure story of a man becoming more than a man and doing what is right. Hester and Smith deliver on the story, and Lau makes it visually interesting. The Bionic Man #5 from Dynamite Entertainment is another great installment and earns 4 out of 5 Stars.