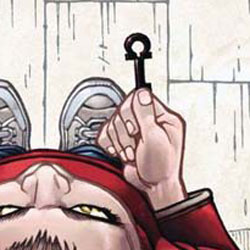 Having taken a quick detour on the history of some of the keys of Keyhouse, Joe Hill and Gabriel Rodriguez bring us back to the present only to send us back to the past. Previously in Locke & Key: When you use the Omega Key, you have the ability to let something evil into this world. 25 years ago, Randell Locke and his friends did something with the Omega Key that set off a chain of events that have lead to death and mayhem across Lovecraft, Massachusetts. The spirit that has inhabited Dodge Caravaggio is now inside Bode, and “it” has its hands on the Omega Key. Meanwhile, readers got a look back at how the keys came to be…

With the Time Shift Key in their possession, Tyler and Kinsey travel back in time to see the entire history of the Keyhouse. The idea of time travel is a tricky one to deal with, as it seems like an easy way for Joe Hill to wrap up the series in a neat package with some time travel shenanigans. However, readers learn that when the users travel to the past, they do it as spirits, who can not make changes to the past. Readers also learn that because of the way the grandfather clock was crafted, the clock doesn’t go back any further than 1775 (the year Keyhouse was going through the revolution), and it can’t go forward any further than 1999 (thanks to the Y2K bug). And because time is in the hands of the controllers, one can travel to the past and witness weeks at a time, but in the current time, be gone for only a few seconds.

After traveling back and witnessing the events of 1775 (see issue #1 of this arc), Tyler and Kinsey decide to travel back and see their father’s great Shakespeare performance that we’ve seen scattered throughout the series since it began back in 2008. Here the duo (and the reader) get to see Randell and friends at their greatest moment, learn more about the power of the keys, and see the moment everyone agreed to use the Omega Key to let a demon through the Black Gate located below the manor. I like how Hill uses the time travel device to inform the readers and our heroes of how things transpired long ago, and I also like the moment where something called the Hannes Riffel Rule is revealed that implies The Keepers of the Keys will soon forget any knowledge of the keys in the house. The only time I’ve seen reference of Hannes Riffel was in the most recent Guide to the Known Keys stand alone issue that contained a correspondence between Riffel and Jean Locke in 1942. It’s an interesting clue as to the direction the story may go in the next 10 issues, and I can’t wait to see how the Locke kids use the knowledge to bring Dodge down.

Even though the series is quickly ending, Hill continues to make each issue a thrill to read, and nowhere does it feel like the issues are simply being stretched out to fill a contract with the publisher.

Once again Gabriel Rodriguez rocks it in the art department. Though we only get to see Bode/Dodge in a few panels of this issue, Rodriguez continues to bring out the evil inside the young boy. The skill of Rodriguez’s pen continues to impress and astound me with each and every issue, and though I usually don’t follow an artist from series to series, Rodriguez’s next work will be on my radar.

Though IDW Publishing has a number of excellent series under their roof, Locke & Key continues to be the best the company has to offer. Though the series is still relatively unknown to many, it continues to gain readers, and this issue continues to spin a tale that shows the seriousness and intensity that this series brings with each release. Though you don’t have to buy it, The Guide to the Known Keys issue will help make some of the plot points revealed in this issue more clear, and enjoyable. There’s no reason not to buy Locke & Key: Clockworks #3, as the issue earns 4.5 out of 5 Stars.