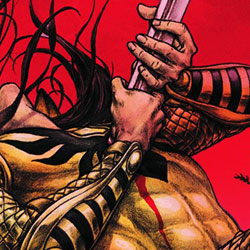 A city under siege, an advancing army of evil – EVIL – and a team of magical based heroes standing in the way. While he is really a she, Demon Knights #4 gives us the low down on the origins of the Shining Knight. Previously in Demon Knights: Mordru and Morgain LeFay continue their attack on the village of Little Spring, sending in dragons, raining down fire, and even allowing the advancing horde to kill a young girl. It’s all building to a great battle, but first…

PSSST… HE’S REALLY A SHE… PASS IT ON…

As each issue progresses, we are given little hints and looks at each characters’ origins and history, and this issue focuses squarely on The Shining Knight and “Sir Ystin’s” first encounter with Merlin. It’s a trippy vision where Merlin sends Ystina looking for the Holy Grail, and though things are pretty cut and dried as to how Ystina’s powers work, there are foreshadowing moments and dire warnings scattered throughout the dream.

Save for a few moments where the Demon Knights get their name, and Morgan LeFay seems to be in on the magical journey, there isn’t really much going on in this issue, which is a real shame. Sure an origin story is good, but to break the story up right at the moment readers are expecting the giant battle to break out, is an overall moment of disruption that takes one out of the story. The Holy Grail hook will certainly play a role in the future, and though this setup does work, this reviewer is one that wishes it had come later in the arc. Even though Ystin/Ystina’s sex has been a mater of jokes amongst the characters, it’s clear this is Morrison’s Shining Knight helping the rest of the party.

I like how DC went ahead and hired two artists to tackle the visual storytelling in this issue. While Diogenes Neves handles the five pages of story that takes place in the Demon Knights world, it’s Michael Choi who bears the heaviest load in the Shining Knight’s dream sequence. Choi does an excellent job, adding lots of detail in the faces, and creating a believable world that Merlin and Ystina inhabit.

Normally when artists share duties on a title, there is a jarring jump between the two. Here, there seems to be more of a natural flow, and what would normally seem odd and out of place for me, works really well in this particular issue.

The first two issues of this story were packed with action, but the last two have slowed the overall story down. If the six issue arc is what the writer and artists are going for, these two issues are the mid-arc drag. More action! More fighty-fighty and punchy-punchy are needed! Though we get a look at Shining Knight’s origin and the art is pretty to look at, the overall book moves very slow. I like the sword and sorcery, and I can’t wait for big battle to break out. Demon Knights is a great ensemble piece, but focusing on a single character for the entire issue earns Demon Knights #4 2 out of 5 Stars.