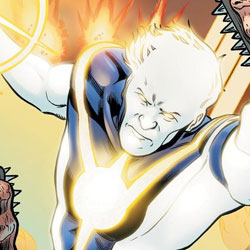 A character who hasn’t been seen since the ‘90s (or 2006 if you read that one book) returns to DC Comics, and we get a whole new man behind The Ray. If you want to know how Lucien Gates got his The Ray powers, Palmiotti and Gray spill it quite quickly and without a lot of grandeur, explaining it away as a government Sun Gun test gone awry. That’s all well and good, and I’m glad it the lead up to getting his powers was explained in two pages. Had this been a book by another writer, the origin story would have taken at least 12 issues to get all the way through.

But this is still an origin story, and though there are moments where the story seems a bit jumpy as Lucien learns to control his powers (including the power to clothe his nekkid body), Palmiotti and Gray do an excellent job in giving the character a reason to be a hero instead of hiding away being all emo about his lot in life. At the same time, the writing duo use the issue to introduce The Ray’s first major villain in the form of Thaddeus Filmore, a deranged and depraved man of the world, who was more interested in seeking out the evil nature of man. Thought dead, the character returns in a very interesting fashion, appearing out of a projected film – almost the opposite of pictures stealing your soul. And to prove how bad Filmore is, Palmiotti and Gray don’t hold back on letting the violence get out of hand.

I have nothing against Jamal Igle, I think his art in this issue is really nice, except when it comes to the Gates family. Lucien describes himself as Korean American, and he is drawn to look the description, but unless he’s been adopted (something not explained in this issue), both his parents appear to be really Caucasian – his father is blonde and his mother a red head.  Other than that odd bit, layouts and composition work well in this first offering.

The Ray is a four issue mini-series, which is fine as DC attempts to find what works best in the New 52. If the series sells well, we may see The Ray become an ongoing character, but I’m not holding my breath right now. The writing is solid, and the art is just as good. Compressing the story into four issues does cause some jumps in story telling, but overall, the first issue of The Ray is really solid, and earns 4 out of 5 Stars.