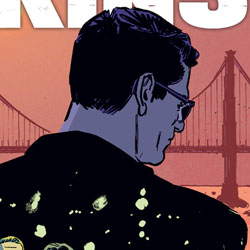 A money laundering scheme gone wrong, the IRS hot on the trail of the hero, and guns firing from all sides. Sounds like a great way to end a mini-series. Or so you would think. Previously in The Rinse: Having accepted a deal to money launder millions of dollars, Jeff Sinclair finds himself trapped between a rock and hard place as the mob, the government, and every manner of ne’er-do-well are after Jeff’s head and the money. The pieces are all in place, it’s just a matter of wrapping the story up.

I was really into this series when it first started, as the notion of the sly fox outsmarting the farmer is one that tends to make for good story telling. The first three issues worked well enough, setting up the characters, the conflict, and the need to get to the finish line without dying. But for some reason, this issue wraps up the story in a very choppy way.

While making money exchanges, the bad guys show up, leading to a big shoot out, a chase scene, and the bad guys getting their due. At the same time, Jeff shows how he worked his magic to get the money rinsed, and how everyone lives happily ever after. In that short description, the story sounds like a great one and makes perfect sense, but there are moments in the issue that make past minor moments in the story bigger than they initially appeared to be. Jeff visiting his friends grave totally changes the relationship set up in previous issues, and I can’t help but wonder if a heavy editing hand forced the story to wrap in four issues instead of five. I like the four-issue mini-series that BOOM! employs to cut cost and get a number of interesting stories out the door, but this time the ending of the book became a let down for me instead of a moment where I want to stand up and cheer.

That doesn’t mean I didn’t like the overall concept, story, and characters found in The Rinse. BOOM! and Gary Phillips need to head down to Tinseltown, and get this property snatched up for a major motion picture movie treatment as soon as possible if they haven’t already done so. The Rinse is a solid premise, and would be a great vehicle for Joel McHale to star. No… really…

As I’ve mentioned before, I do like Marc Laming’s art in this series, even if it does seem a tad too house style at times. The one area I wish could have been better was the coloring. At times hair colors change ever so slightly in the environment, and because some characters have similar builds, there are moments in the issue that visually confuse the reader.

Overall, the series made for an interesting read, and for those wanting something else besides superheroes and war comics, The Rinse did provide a nice deviation. Unfortunately, this particular issue seemed rushed and jumpy as it tried to wrap the story up in the assigned number of pages. There’s no reason to not pick up this issue if you read the previous three, but don’t go in expecting a twist that you didn’t see coming. The by-the-numbers conclusion earns The Rinse #4 2.5 out of 5 Stars.