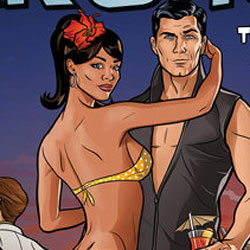 Sterling Archer, the world’s most dangerous spy, and his snarky ISIS cohorts are back for another outrageously raunchy season when ARCHER The Complete Second Season comes to Blu-ray and DVD on December 27th from Twentieth Century Fox Home Entertainment.

When he’s not busy foiling eco-terrorist threats, tracking down mysterious killers, or having sex in x-ray machines, the suave master-spy has his hands full with bikini-clad ninjas, Swiss nymphomaniacs, and paternity suits.  Archer searches for the true identity of his father, battles breast cancer, and brings a sexy, ex-KGB agent home to meet his domineering mother.  It’s all in a day’s work for the international man of mystery in this uproariously edgy animated farce. Twentieth Century Fox Home Entertainment, LLC (TCFHE) is a recognized global industry leader and a subsidiary of Twentieth Century Fox Film Corporation, a News Corporation company. Representing 75 years of innovative and award-winning filmmaking from Twentieth Century Fox, TCFHE is the worldwide marketing, sales and distribution company for all Fox film and television programming, acquisitions and original productions on DVD, Blu-ray Disc Digital Copy, Video On Demand and Digital Download. The company also releases all products globally for MGM Home Entertainment. Each year TCFHE introduces hundreds of new and newly enhanced products, which it services to retail outlets from mass merchants and warehouse clubs to specialty stores and e-commerce throughout the world.