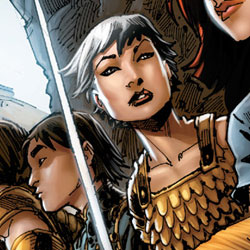 BOOM! Studios sent Major Spoilers a sneak peek of titles arriving in stores this week.  Take the jump for a look at 7 Warriors #2, Operation: Broken Wings, 1936 #2, Snarked #3, and more.

From the fan-favorite artist of The Flash and Adventure Comics comes 7 beautiful women, 7 WARRIORS! In 6th century Libya, the capitol of an ancient nation is surrounded by the Persian and Byzantine armies. Seven are chosen to save the heir to the kingdom. The exquisitely rendered tale in the vein of 300 marches on, written by Michaël Le Galli and drawn by Francis Manapul.

X-Men Deadly Genesis and Wisdom artist Trevor Hairsine brings you WWII action like you’ve never seen before! It’s 1936. A German intelligence officer is tortured by his superiors. They want to know why he has turned against them. Imprisoned, he gives up nothing as he seemingly waits for death…or the right time to strike! Written by Herik Hanna and drawn by Trevor Hairsine, Operation: Broken Wings, 1936 gives you deadly intrigue and bone-crunching action exactly as you like it!

Roger Langridge — the Harvey Award winner behind THE MUPPET SHOW and THOR: THE MIGHTY AVENGER — continues his all new side-splitting adventure that can only be explained as…SNARKED! Journey with Langridge as he pulls the carpet out from under such Lewis Carroll classics as “The Walrus and The Carpenter,” “Through the Looking Glass,” and “The Hunting of the Snark,” creating an brand new world of humorous grandeur. Princess Scarlett, baby Rusty, and the Walrus and the Carpenter must find a crew to help take their quest to the sea — and who better than those of the Snarkhunter?! The search for the Red King continues in the all ages adventure that has captured the hearts of your and old alike!

This is it, people – the grand finale revealing Selena’s secret is finally here! As Selena and Chris reach London, they will learn the real reason why Selena decided to come back to Great Britain. And the American occupation isn’t the only thing preventing her from her secret goal… The series that connects 28 Days Later to 28 Weeks Later concludes here in this final volume!

A conspiracy threatens the end of the Uncharted Territories and not one, but two Leviathan crews – the outlaws on Maya and a new crew of ex-Peacekeepers – team up to take on the conspiracy! And the result will certainly blow your mind! It’s the Farscape event you can’t miss, as series creator Rockne S. O’Bannon grabs “The War for the Uncharted Territories” and turns it up to eleven!