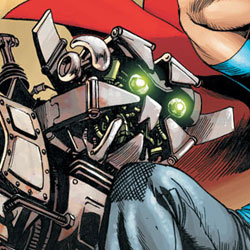 Previously in Action Comics: Having escaped the clutches of the military, Superman has retreated into his Clark Kent persona, hoping to gain respect as a reporter. Unfortunately, while covering a factory story, the robots take on a mind of their own… or more specifically the mind of the alien force orbiting the planet from above.

It’s mayhem and madness in the streets of Metropolis as robots, calling themselves Terminauts, begin collecting artifacts that need preserving. Though they aren’t causing immediate harm to the citizens of Metropolis it is clear the citizens need Superman to save the day. And when he does appear, it’s a robot kicking display of man and metal that we haven’t seen since Max Fleischer brought us The Mechanical Monsters.

Not only do readers get a chance to see the metal menaces maraud through Metropolis, what we assume is Metallo appears as John Corbin’s anti-Superman suit is fully fueled and ready to give Superman the ol’ what for. And in an attempt to outdo himself, Morrison also gets John Henry Irons into the act as he suits up and becomes Steel for the first time in the New 52. While all this is going on, Lois and Jimmy attempt to capture the story, and Lex Luthor does everything he can to escape the fate of the fair city – being shrunk into the Bottled City of Metropolis.

There is a lot of action in this particular issue leading up to the big reveal that the city is now at the mercy of a still mysterious alien (Brainiac?), and that Superman and the army come to a truce so Superman can save General Lane’s daughter. The one odd bit of storytelling comes in Steel’s battle with Corbin, as readers are asked to jump to the eight page backup to see that fight in full. And since the backup isn’t written by Morrison, the transition seems screwy.

Though I’ve been on both sides of the Love-Morrison-Hate-Morrison debate, I think Superman is the one character Morrison loves enough to tell decent stories. There are some great one-liners as Superman tells the police to step aside, and Luthor scrambles to save his sorry hide, and overall there is a sense of hero worship going on

A FEW ICONIC PANELS… and a few party fouls

Rags Morales once again delivers some superb art. THere’s something about the way Morales draws Superman in a t-shirt and jeans that look like the character has been wearing that costume style since the 1930s. The change in shirt color from blue to white is still a mystery to me, and probably others as well. Maybe Clark tossed in one too many cap fulls of bleach in the last wash…

And while Morales offers up some great panels, he also throws up a couple of panels that look goofy. The panel where Superman tells the police to let him do his job features the Man of Steel in a pose and look that should go down as an iconic panel – it simply shines, but then four panels later Superman looks like he has a bad case of amblyopia.

DC is riding high on the success of this rebranding/relaunch/reboot and Action Comics is a great example of what a company can do with the right talent, the willingness to take a risk in retelling origins, and keeping fans (new and old) interested in the story. While I don’t like the jump in the Steel story, and some of the Luthor silliness is rather anti-lex, the art is good and the overall roller coaster ride of a story Morrison is serving up earn this issue 3.5 out of 5 Stars.