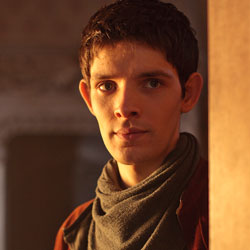 The SyFy Channel dropped a quick note to us to let everyone know that Merlin begins its fourth season on January 06, 2012. The fourth season of MERLIN begins with a breathtaking reminder of the continued power of the evil Morgana (Katie McGrath). Her betrayal of her father, King Uther (Anthony Head), and his kingdom brought the third season of MERLIN to a memorable, action-packed close. It doesn’t get any easier for Prince Arthur (Bradley James) and Merlin (Colin Morgan) in the newest season, which finds the heroic pair seeking to halt her treachery while realizing their own fabled destinies. The Knights of the Round Table get formed this season, and audiences will get to see Lancelot (Santiago Cabrera), Gwaine (Eoin Macken), Perceval (Tom Hopper), Leon (Rupert Young), Elayn (Adetomiwa Edun), and many more appear this season. “MERLIN has definitely grown up,” says executive producer and co-creator Johnny Capps. “The lightheartedness that is always at the heart of our story is certainly still there, but as the threat from Morgana and Morgause has grown, it’s become darker and more dramatic, with an incredibly compelling story of a kingdom on the brink of destruction.”

In addition to new heroes, the villains also grow in number as Morgana and Agravaine, Arthur’s uncle, team to bring Camelot to its knees. Fans overseas have probably already seen the upcoming season, and I’m sure they’ll use the comment section below to spoil it all for you.