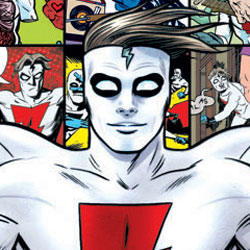 This is THE BIG ONE! This December, 20 years after Michael Allred’s independent comics icon was introduced to the world, a celebration of all things Madman will take the form of a gigantic 11 x 17 hardcover! The MADMAN 20TH ANNIVERSARY MONSTER HC will include an all-new MADMAN story from Allred, as well as contributions from an impressive list of industry giants such as Darwyn Cooke, Frank Quitely, Jeff Smith, and Erik Larsen.

The jam-packed 264 pages of this epic coffee table book will weigh in as the perfect selection for those looking for the most ginchy of gifts this holiday season. The MADMAN 20TH ANNIVERSARY MONSTER HC will appeal to any fan of the heartfelt, retro-pop heroics of MADMAN and Allred’s other critically acclaimed work like X-Statix and iZombie.

Twenty years on, Madman still holds the same appeal with fans, and with his creator, more than ever. “In my new story I was inspired to take Frank “Madman” Einstein on an adventure that took him on retrospective time trip, an inter-dimentional detour, a jungle excursion, and a kind of faux-family therapy exchange. I pulled out all stops,” Allred said. “We’re making sure that everyone will be getting some serious bang for their buck!” ABOUT MICHAEL ALLRED
Never met a comic book fan he didn’t like. And he loves making comic books for folks who love comic books. For more information about the creator and his work, visit http://allredart.blogspot.com/.