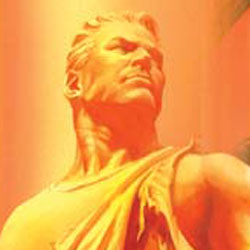 Previously in Flash Gordon: Everything you knew about Flash Gordon is gonna get flipped on its head. No Buster Crabbe, no Playgirl-centerfold Sam J. Jones, and no T.V.’s Steve Holland.

Earth is being bombarded by fiery meteors, and the President has called for anyone who can assist with the crisis to help. SPLASHPAGE to Flash Gordon, a polo player, and Dale Arden, cartographer and researcher, parachuting to safety after their plane is hit by a flaming rock from space. The duo land at the doorstep of Dr. Hans Zarkov, who believes he can solve the meteor menace by kidnapping Flash and Dale in his rocket ship with a destination to Mongo.

If this sounds familiar, it should, it is the basic plot of the first appearance of Flash Gordon in the funny pages way back in 1934. In a day and age where everything is getting a modern update to classic characters and tales, it is good to see Dynamite Entertainment, Eric Trautman, and Alex Ross paying homage to the source material.

There are things that do get tweaked the original though; Zarkov is a stark raving over the top lunatic in this issue, which does so much more to explain how the trio end up on Mongo, and to give Earth a bad guy, and it is revealed that Ming and Hitler are in league with one another. Hitler serves as the proxy ruler for Ming in exchange for help in overthrowing the world. The issue closes out with the introduction of three new characters – Kimjo the Lion Man, Vulkor the Hawkman, but not THAT Hawkman, and Ziva Aljaani of the Golden People. They have been sent to Earth by what readers are lead to believe is a resistance group to track down and kill Hitler. So by the end of issue one, it looks like we are going to get parallel storytelling between the lost heroes on Mongo and the lost heroes on Earth. It should be interesting, though in the end, the story may not has much impact if the two groups don’t join forces at some point.

When the art shines, it does so because it too harkens back to the days of yesteryear and the source material. Dr. Zarkov’s spaceship is right out of the Golden Age, and the few shots we do see of Ming are the classic character one expects to see in the comics.

Even though Ross isn’t doing the art in this issue, he did give guidance to Daniel Indro on the direction the art should take. For the most part, the issue is a success, though there are times when certain panels get too cluttered making it hard to discern what is going on. Of course this could also be the result of the watermarked preview copy sent to to us by Dynamite Entertainment.

BOTTOM LINE: I’D BUY THAT FOR A DOLLAR (AND SO SHOULD YOU)

Flash (AAAAAHHHH!) will save every one of us! And he’s gonna do it in the pages of Flash Gordon: Zeitgeist. The introductory issue is pretty solid as far as first issues go as we’re introduced to the key characters, the antagonist, and the world of the future (cira the 1930s). I like that the story takes pieces from the source, and adds a bit of its own flair. The art is solid, though overuse of the color red tends to make the pages seem muddy. For a dollar, there’s really no reason not to pick up this first issue, and once you do, you soon discover the story sucks you in. Flash Gordon: Zeitgeist #1 earns 4 out of 5 Stars.