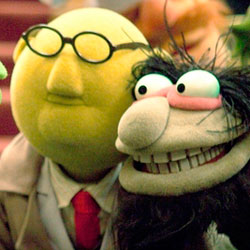 The Thanksgiving holiday is a big one for the movie industry.  The five day weekend, means a lot of people are heading to the movie theaters to catch the brand new releases and to kick off the final box office push for 2011.  While many people were excited about the new Muppets movie, even more people lined up for the latest installment of Breaking Dawn.

The Muppets did very well bringing in $42 million over the break.  That was enough for the long dormant franchise to take second place overall.  But it was Breaking Dawn – Part 1 that took the box office top spot with $62.3 million in its second weekend of release.  Overall, Breaking Dawn has brought in over $220 million.  While Happy Feet got a lot of attention when it was first release, Happy Feet Two has stumbled, bringing in a total of $44.8 million since its release.

Will The Muppets overtake the vampires over the next couple of weeks, or will the vampire movie franchise continue to rake in the dollars through the end of the year?