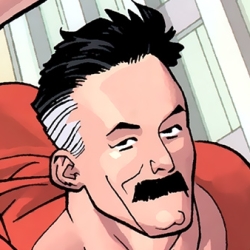 Allen the Alien makes a difficult decision, Nolan is reunited with Kid Omni-Man, and a lot of people have a lot of sex in this month’s Invincible! Previously, in Invincible: While the Viltrumite invasion of Earth miraculously didn’t result in the destruction of the planet, it did end with the Viltrumites infiltrating Earth’s society, making an agreement with Invincible (Mark Grayson) and Omni-Man (Nolan Grayson) that the two parties would leave each other alone, lest they enter into mutually assured destruction in a battle that would devastate the Earth. During the Viltrumite war, Kid Omni-Man (Oliver Grayson) was injured and sent to Talescria to recuperate, where he’s been staying with Allen the Alien (one of the great comic book names, which I frequently portmantypo as “Allien”) and his girlfriend.

We see a riff on a joke from previous issues of Invincible–in the past Omni-Man stayed at Allen’s house, and was treated to the sounds of Allen and his girlfriend doing it every night, despite Allen’s firm belief that his apartment was soundproofed enough that it wouldn’t be a problem. In the present day, Kid Omni-Man has apparently been putting up with the same thing, having actually accidentally walked in on the pair going at it.

When Nolan and Deborah arrive on Talescria, Oliver is excited to have a respite from overhearing Allen and Telia’s bedroom activities. In the culmination of the issue-long joke, Nolan accidentally leaves the door to his bedroom open and Oliver is forced to hear his parents get it on. Cory Walker draws this scene as a parallel to the previous scenes where Nolan was in Allen’s apartment; Oliver is laying on the couch trying to drown out the sounds with a pillow.

I really enjoy this sort of callback, and what’s interesting is that I believe the artist on the issue this one references was Ryan Ottley, whereas this issue is Cory Walker. I enjoy Walker’s art, and he has definitely improved from when Invincible began oh-so-many years ago, but I prefer Ottley’s work on the title.

Invincible May be a Bit of a Misnomer…

Despite the title, this issue doesn’t contain any Invincible, which is frustrating given the cliffhanger we were left with in 84, when Mark broke Dinosaurus out of the Pentagon prison to try to save the world through means less than savory to the U.S. government. I don’t mind this, especially since we get the next issue in only three weeks, but it is worth noting.

Instead of Mark, we get a lot of his father. And by a lot of his father, I mean there isn’t a whole lot left to the imagination, as his father is naked for a decent bit of this issue. You see, it is a long ride to Talescria and since Nolan and Deborah have been on somewhat rocky terms in recent days, the journey provides an opportunity to spend some quality time reacquainting themselves with each other and solving their marital problems, mostly through having lots and lots of sex. The art is very tastefully done with this, and Kirkman throws in some very clever dialogue along with the scenes.

The plot advancement in this issue doesn’t take up much of the story, but it will have some real consequences in the immediate future. Allen discovers the Viltrumites are living on Earth now, and as leader of the alliance it is his duty to do something about it, even if it means Earth is destroyed. He wants to use the Scourge virus that worked well against the Viltrumites once, while Omni-Man tries to convince him that just as Earth changed him, so could it change the rest of the Viltrumites. This exchange sets up the main conflict of the next book, as Omni-Man will be battling Allen over the fate of the Earth.

THE VERDICT: Not much happens, but it’s a lot of fun!

Robert Kirkman has recently become one of my favorite comic book writers thanks to his witty and quick-paced dialogue in Invincible. The story he tells in this issue doesn’t advance the overarching plot a ton, but it establishes a key plot point and spends the rest of the issue making some jokes. While I am left a bit frustrated that we don’t get further revelations as to what Mark is doing, I really enjoyed both the writing and the art (even if it wasn’t Ryan Ottley), and give this book four out of five stars.