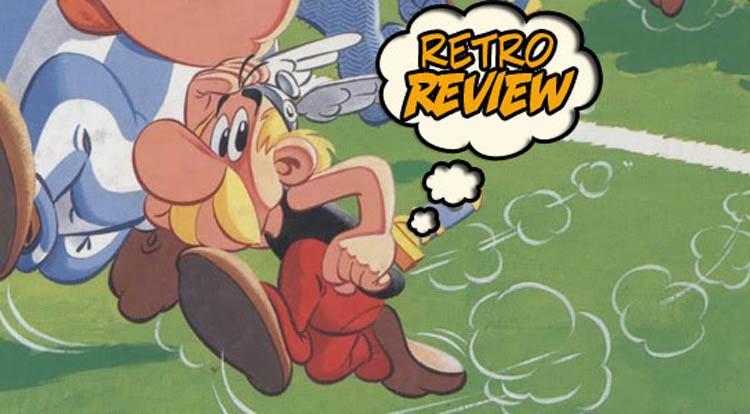 or These Britons are crazy!

It’s become a holiday tradition at Major Spoiers – after we awake from the Turkey Sleep, we stagger to the keyboard and tell you of the adventures of Asterix the Gaul. This year the first volume to catch my eye was Asterix in Britain. Does the book stand up to the other great Asterix stories out there? Previously in Asterix: Having secured victory in the Big Fight, the quiet Gaul village returns to a life of isolation – the lone holdout in a land occupied by the Romans.

The Romans have invaded Britain, and in the opening pages, we find out why – the Britons stop fighting at five o’clock every day to drink hot water with a spot of milk, and refuse to fight on weekends. The Roman Empire quickly seizes control of everything except a small village, very much like the one the title character and his friends live in. The central British character, Anticlimax (Asterix’s second cousin twice removed) is sent to seek aid from the Gauls with the hopes of procuring some of Getafix’s strength potion.

Of course Asterix and Obelix agree to accompany the distant relative back to Britain to ensure the barrel of strength potion arrives safely, and to help the Britons in sending the Romans packing. Before leaving, Asterix grabs a bunch of herbs that might be of use at some point down the road. When Asterix and Obelix arrive, they discover a society that is quite different from their own, and it opens the doors for a lot of ribbing and joking at the expense of the British. Everything from the love of Rugby, driving on the wrong side of the road, constant fog, warm beer, boiled foods, and mint sauce. Making fun of cliches is something that happens every time Asterix and Obelix travel abroad, but this time, the only response Obelix can come up with when faced with regional oddities is to proclaim loudly, “These Britons are crazy!”

There isn’t much to this story as quickly the barrel is accidentally confiscated, and the book devolves into a big episode of Barrel, Barrel, Who Has The Barrel? In the end, the trio lose the potion in the river Thames, which gives Asterix the idea that he might be able to conjure up his own strength potion by boiling the herbs Getafix gave him and serving it to the Britons. The sudden kick of caffeine does give the citizens the strength needed to get their country back, but in the end, the tea gag was simply too drawn out to have any real punch.

While making fun of stereotypes continues to bring a smile to my face, the one thing I love the most in these books is the fantastic names Goscinny comes up with for the characters. These puns make reading the book a joy, even though the overall story feels like it is simply going through the motions.

One thing that doesn’t change in a translation is the art, and Albert Uderzo is in great form in this volume. While there are a number of similarities in the way citizenry dress and the architecture looks the similar to the Gaul village, there is a distinct air of being in a different country in this book. Much like Asterix in Spain, Uderzo captures the feel of the region, without having to rely on specifics.

BOTTOM LINE: GET AN ENGLISH TRANSLATION

While this may be one of the better Asterix tales in the original French, I think my disappointment for this book comes from the translation itself. A little research seems to indicate that my translation is a more recent one, where much of the grown up humor is removed to make it more accessible to the 9 – 12 year old set. It’s a real disappointment for me, as I was hoping to wrap up my holiday with a great read. If you want to pick up this book, make sure it is the Anthea Bell and Derek Hockridge translation. There are some fun moments, and the art continues to shine, but this translation leaves something to be desired, earning the book 2.5 out of 5 Stars.