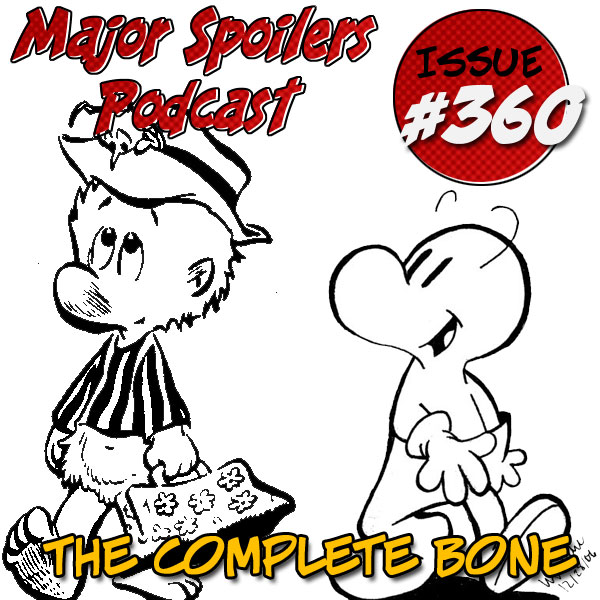 This week on the show: The Complete Bone! Reviews! Odin does something to Iron Man! All this, plus Matthew, too, in this installment of the Major Spoilers Podcast.

WARNING: MAJOR SPOILERS IS NOT RESPONSIBLE IF YOU SPIT COFFEE ALL OVER YOUR COMPUTER IF YOU LISTEN TO THIS EPISODE AT WORK.

REVIEWS
Stephen
Batman #3
Written by SCOTT SNYDER
Art by GREG CAPULLO and JONATHAN GLAPION
Cover by GREG CAPULLO
As Bruce digs deeper into the mystery of the recent owl murders, he soon finds himself face to face with a shocking enemy – an enemy the Wayne family has secretly been at war with for centuries. Be there for the first shots of the war for the soul of Gotham City. Friends will become deadly enemies and secrets will be revealed – revelations that will change the Bat-family forever.

Rodrigo
THE STRAIN #1
When a Boeing 777 lands at JFK International Airport and goes dark on the runway, the Center for Disease Control, fearing a terrorist attack, calls in Dr. Ephraim Goodweather and his team of expert biological-threat first responders. Only an elderly pawnbroker from Spanish Harlem suspects a darker purpose behind the event-an ancient threat intent on covering mankind in darkness.

Matthew
Fear Itself #7.3
Written by MATT FRACTION
Pencils & Cover by ADAM KUBERT
Variant Cover by SALVADOR LARROCA
Iron Man squares off against the All-Father of Asgard Odin. And that may not be the worst of it all as a terrible secret of Tony is leaked to the world.

Major Spoilers Poll of the Week:

Dungeons and Dragons Game Play Edition
As the season finale of Critical Hit: A Major Spoilers Dungeons and Dragons podcast draws ever nearer, and the number of questions about campaign building flood in, it brings up an interesting question about game settings.  Do you like to use the Wizards of the Coast campaign settings, create your own world (including skinning monsters), or a combination of both – the Tolkien-esque fantasy world, using monsters as described in the Monster Manual, but the setting is completely your own?
[poll id=”208”]

Discussion:
Bone: The Complete Volume
Art and Words by Jeff Smith
The series centers around the Bone cousins, white, bald cartoon caricatures. In the opening pages of Bone: Out from Boneville the three Bone cousins—avaricious Phoncible P. “Phoney” Bone, goofy cigar-smoking Smiley Bone, and everyman character Fone Bone—are run out of their hometown of Boneville after Phoney decides to run for mayor and built a balloon on top the head of a statue of Boneville’s founder. A strong wind made the balloon break the head off of the statue and all the townspeople ran Vincible, Smiley, and Fone out of town. After crossing a desert, the cousins are separated by a sea of locusts and individually ending up in the mysterious Valley and must make their way across the fantasy landscape pursued by rat creatures. They joyously reunite at a local village called Barrelhaven, where they are taken in by a mysterious girl named Thorn and her even more enigmatic grandmother. Fone Bone instantly develops a crush on Thorn when he meets her, and repeatedly attempts to prove his love through poetry. As they stay longer in the valley, they encounter humans and other creatures who are threatened by a dark entity, the Lord of the Locusts. The Bones are quickly drawn into the events around them, compelling them on a hero’s journey to help save the world.