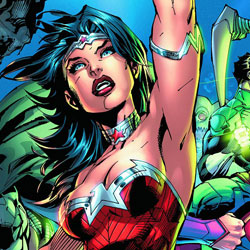 Four members have been introduced in this all new take on the Justice League. This issue finds two warriors joining in the fight, and another fighting for his life. Previously in Justice League: Mother boxes have opened up boom tubes, ejecting Parademons upon the unsuspecting quartet of Green Lantern, Superman, Flash, and Batman (he has no powers). During the attack, young Victor Stone has been gravely injured, and if someone doesn’t do something soon, he will die…

“YOU SHOULD BE VERY PROUD OF THIS ACHIEVEMENT”

This issue finds the testosterone driven frenzy of men in tights turning toward the gentler, kinder, curvier, female perspective. But in this New 52, Wonder Woman may look like a supermodel, but she has the fierce spirit of a warrior, eager and happy to fight for honor and glory. Readers don’t get to see how she and Steve Trevor met, instead we are given the aftermath – citizens up in arms over the path of destruction she makes every time she gets in a fight, and the outcry for her removal.

This anti-hero mentality that Johns has created in the populace isn’t a new idea from the writer, as we’ve seen what happens in the far future when xenophobia gets out of hand for Superman and the Legion of Super-Heroes. We know that Darkseid is the big bad, and once these heroes stand up against the planet conquering marauder, public opinion of people with powers should change. In light of the hate, going with the biggest and baddest villain in the DCU now seems like the logical choice.

Johns also makes a connection between Victor Stone and Darkseid when Vic’s father uses technology discovered and recovered from around the globe to save his son. When Cyborg activates, something inside him makes a connection with the menace, which further foreshadows Vic joining the team.

The final player introduced in this issue is the King of Atlantis himself. We’ve seen a toned down version of Aquaman in the current ongoing series, but here, Johns gets to show Arthur Curry for the first time, and his entrance is probably the most memorable of the series far when he quips, “So, who’s in charge here? I vote me.”

While figuring out cool new ways to introduce the characters seems to be the way of this title, the other thing that is interesting to note is that these characters aren’t afraid to kill. Granted, they are fighting Parademons, but when Superman doesn’t appear to have any problems using a girder to tear apart the enemy, one wonders if we will see some heroes take a more direct approach to ending a fight in the New 52.

FLASHBACK TO THE ‘90s

Jim Lee’s art throughout this issue is stellar, as he makes the Parademons look positively frightening, Wonder Woman stunning, Victor Stone tragic, and Aquaman like he’s channeling Rob Leifeld. There’s something about that final Aquaman pose that bothers me – throwing me back to the thrilling days of yesteryear when everything Image touched turned to gold, but now seems like a nightmare we’d all just as soon forget. Aquaman’s windswept hair, his stance, and costume looks almost like he was trying to draw Shaft from Leifeld’s Youngblood days.

Other than that uncanny moment that closes out the issue, I think Lee did a fantastic job making Diana look innocent but willing to whip out the blade to fend off attackers at a moments notice. The few splash pages that are used in this issue are used to great effect, as turning the page and seeing the action presented for the first time does give the reader a sense of awe and wonder.

Three months in, and Justice League is still the one DC itle that I look forward to reading each time I see it my pile. Yes it is another take on the heroes meeting for the first time, but this time, Johns seems to understand where the interpersonal and external conflicts are coming from, and is using those as the catalyst to tell the story. I’m sure in the hands of Johns and Lee, the conclusion of this arc is going to be epic. There are a few concerns over art and killing the enemy in a violent manner that bothers me a bit, but overall Justice League #3 is still worthy of 4 out of 5 Stars.