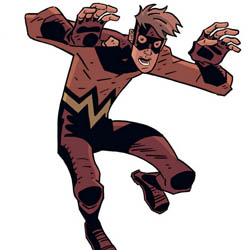 In the introduction to this issue, Paul Grist says that he’s a fan of comics, “not floppies or pamphlets or any of those other slightly derogatory terms that people use to belittle the format.”  As I write these words, I haven’t gotten any further than writing this introduction, and those words alone have earned him about a star-and-a-half on my rating scale.  How will the actual story bits fare? Previously, in Mudman:  I first encountered the work of Paul Grist as the artist of “St. Swithins Day,” a particularly entertaining bit of B&W explosion existential self-examination (written by a pre-superstardom Grant Morrison.)  Over the last few years, he has probably had the highest profile as penciler of Jack Staff, the book that most people probably recognize as “not Union Jack.”  Grist is an avid fan of superheroes and especially of comics, and now he’s setting out to give us an equivalent of the old-school monthly comics experience.  Can it ever be as good as it used to be?

This issue starts off strong, with a puzzling soliloquy, with the speaker unknown, and no context, but rather than annoying me with it’s obscurity, I am immediately drawn into the story (although Grists’s crystal-clear art style may be helping me along.)  We then meet Owen Craig, a young English lad who is for all the world like a little British Peter Parker, but in a good way.  Owen sneaks into the local haunted house, and finds a strange hidden chamber with an odd-looking costume standing empty in the middle of the room.  He hears someone approaching, and things quickly get out of hand.  Owen awakens the next morning with little memory of what happened, but finds that strange things seem to be happening to him, all related to a really weird dream that he remembers after coming home.

A COMIC-BOOK ORIGIN IN THE CLASSICAL VEIN.

What actually happened is intentionally kept unclear, but we follow Owen through a day, and Grists once again hooks me with his art.  Every character is super-expressive, and not a single line goes wasted.  Much like Ryan Ottley’s work on early issues of Invincible, the art is stylized in its’ simplicity, and the effect actually adds to the story’s attempts to harness the energies of comic books long gone.  The issue ends with Owen (after a rough first day of school) discovering that strange men have kidnapped his father and are holding him in the strange empty house, leading him to put on that strange costume and confront one of the bad guys…

…who promptly puts bullets right through his chest.  Owen looks at the gaping holes in the mud that now comprises his body, and thinks, “It’s just a dream isn’t it?”  As he waits to wake up, we fade to black.

I remember being kind of intrigued by the solicitations and cover drawings for this issue in Previews, but for some reason, I didn’t follow through and order it.  Only the grace of Manager Jim at Gatekeeper saved the day, though, and I’m glad it did.  This issue was a joyous experience for me, recalling the days when I could wander into S&S Drug and pick up an issue of Ghost Rider or Incredible Hulk or Teen Titans and get lost in an entertaining story with interesting characters.  I didn’t get the third chapter of a six-part epic or a twenty-page description of action that took place off-panel, I got a STORY, and this book delivers, not only as a first issue, but as a single issue of a comic book.  Mudman #1 is intentionally designed to remind you of days gone past, and looks damn good doing it, earning 5 out of 5 stars overall.  If this book ISN’T Image’s next ‘Invincible,’ it absolutely should be.

Faithful Spoilerite Question Of The Day:  Why do so many people who claim to love comics insist on treating the monthly issue like the hillbilly cousin who never gets invited to family gatherings?