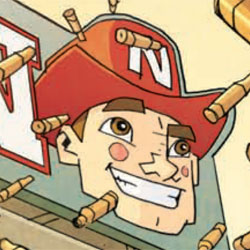 REVIEW: Atomic Robo and the Ghost of Station X #3

Atomic Robo has been on the receiving end of a lot of bad things. Now, it time for Tesladyne to take the fight to the enemy… if they can only find out who they are. Previously in Atomic Robo: Having received a frantic call from NASA to save astronauts, Robo flies into space, only to have a satellite dropped on his head. Re-entry doesn’t go so well, causing Robo to go through a complete system overhaul (and redesign). When all is said and done, the Action Scientists discover it is all a plot to kill Robo, which means only one thing… it’s time to take the action to the bad guys. Also, a building in England was stolen…

IF YOU AREN’T READING ATOMIC ROBO, YOU DON’T LOVE LIFE

It only takes a few panels for everyone at Tesladyne to discover that MJ-12 (aka Majestic Twelve, aka Majestic Trust, aka MJ XII, aka Mars-Jupiter 12… well, you get the idea) is behind the mystery phone calls Atomic Robo has been receiving. And of course we all know where MJ-12 has their headquarters – Omaha.  The team suits up and prepares for battle, including Bernard who has seen things…

If you don’t think your comic book has enough action and giant Michael Bay type explosions in it, then you need to pick up this issue. Once Robo and company show up at the secret headquarters, and MJ-12 forces show up, it is one big fight scene as explosions and action get wilder and more intense as the team attempts to escape.   Meanwhile, the mystery of the missing warehouse eases to a solution as everyone’s favorite bumbling Action Scientists attempt to figure out how one makes a building vanish overnight.

Clevinger once again does what Clevinger does best with this series – writes clever stories wrapped in modern myth, real and pseudo-science, lots of action, funny dialogue, and characters that are easy to identify with.

IF YOU AREN’T READING ATOMIC ROBO, THEN YOU HAVE NO JOY IN YOUR SOUL

While Scott Wegener has been stretching his artistic legs these past issues as he adjusts his style and brings more detail to the background, this issue shows how he is not afraid to draw a lot of characters. From a room full of Action Scientists to the interview sequence featuring all manor of dock workers, this issue is full of characters that require an artist to take the time to make each unique.

This had to be a fun issue for Wegener to work on, because he gets page after page of action, with little dialogue, and lots of explosions and guns. The big fight sequence is so well done, it’s amazing the guy doesn’t get daily requests to storyboard high action movies.

BOTTOM LINE: IF YOU AREN’T READING ATOMIC ROBO, THEN THERE IS SOMETHING SERIOUSLY WRONG WITH YOU

In the hilarious solicitation for this issue, Clevinger states this is a great jumping on point, and I’m going to have to agree with that statement. While having a bit more information on what is going on would be good for the n00b, there’s enough information and fun in this issue to justify picking up the series in the middle of the story. Once again, great writing and great art earn Atomic Robo: The Ghost of Station X #3 5 out of 5 Stars.