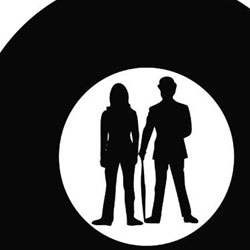 BOOM! Studios has announced it is reprinting the Grant Morrison/Ian Gibson Steed and Mrs. Peel series from 1990.

The series was originally released by Eclipse Comics in a three issue prestige format.  BOOM! Studios will chop that up into a six issue series that kicks off in January 2012.

From the one and only Grant Morrison — “The Golden Game Part One: Crown and Anchor!” Your favorite Avengers finally return! When Tara King is kidnapped by a mysterious organization, John Steed and Emma Peel must reunite to solve this mystery. Featuring gorgeous art from Ian Gibson, best-known for his work with Alan Moore on “The Ballad of Halo Jones.” A science fiction/spy fiction mash-up from Grant Morrison and two of TV’s most iconic heroes! According to some sources, this book was one of the hardest Morrison projects to find in the United States.  Now, it looks like everyone will be able to get their hands on Steed and Peel in the new year.