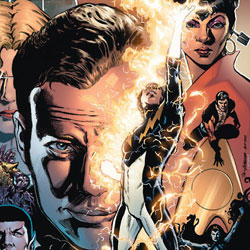 When two popular properties crossover, expect mayhem to ensue. Of course the two teams need to actually meet each other first…

Previously in Star Trek/Legion of Super-Heroes: Due to some weird temporal shenanigans your favorite Star Trek: The Original Series, and Legion of Super-Heroes characters were thrown across space and time and space-time only to wind up in a world where anything alien is hunted down and taken care of… permanently.

THE SLOW SLOW BUILD TO SOMETHING

While the ST:TOS remain hunkered down fending off Imperial Planets goons, and the Legion is busy trying to get away from an angry mob, readers are introduced to the mysterious Emperor, who fills the citizenry in on the on-goings throughout the empire. For those wondering how the DC and Star Trek universe could co-exist, this issue pretty much shows that they don’t exist well. The Imperial Planets goes to great lengths to sow the seeds of discontent between opposing forces (Klingon and Khund, Organians and Controllers, and so on…) which allows the Imperial forces to do what they do best – conquer.

When both teams do manage to get away from those that want to kill them, both realize that this planet Earth is not their respective planet Earths, and thanks to Braniac and a salvaged piece of the Time Sphere, is able to make his way to the Enterprise crew. Meanwhile, Spock is able to use the computer on the crew’s hijacked shuttle to discover and share the history of the Earth they are currently on. Seems the Roman Empire never fell, and humans had a boost in technology which allowed them to leave the planet centuries earlier, not as explorers, but as conquerors. Readers never get to see the full face of the Emperor of the Imperial Planets, and while I don’t think it is this universe’s version of Kahn, I do think it just might turn out to be Vandal Savage.

I like Chris Roberson – I’ve been a fan of his for a long time, and while he is able to throw in some really great plot twists, and a few surprises, this issue plods along very much like the first issue did. Readers are given a lot of backstory, but very little in terms of story progression in getting the heroes back to their universes (universii?). I was hoping at the very least the teams would have met midway through the issue and shared information with each other.

Like Roberson, I’m also a big fan of the Moy brothers, and usually track down their sketchbooks and original art each year at Planet Comic Con. The art duo continue to deliver stellar images and layouts, and there is really little to complain about. While I love the Archie Legion, I’m glad we’re seeing an older, more mature look at the characters, which probably coincides with Jeffery and Philip’s style as it has changed over the years.

BOTTOM LINE: THE LEGION OF SUPER-HEROES YOU WANT

I’m sure the Star Trek/Legion of Super-Heroes crossover didn’t get a lot of attention from DC because the company was busy with its own relaunch of the property. However, in six months, when fans have once again turned against what is going on in the current Legion book, I hope those in power consider turning the Legion of Super-Heroes over to Roberson and the Moys. They get the characters, and the art style is terrific for both the LoSH and the ST:TOS group. While the story seems to spin in many places throughout the issue, overall, it’s a great read that to this point successfully gives readers a crossover between two properties that seemingly don’t belong in the same universe… and I’m gonna guess by the time it is all over, everyone won’t be in the same universe. Pick up Star Trek/Legion of Super-Heroes #2, it’s certainly worth 3.5 out of 5 Stars.