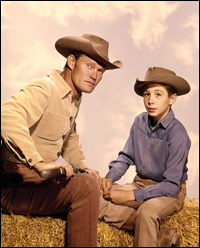 TELEVISION: Rifleman headed back to television

By Stephen Schleicher on November 9, 2011 7 Comments

There are few television intros that are super memorable. The Rifleman was one of those intros…

Yup, Chuck Conners was pretty cool rockin’ the Winchester 1892 and not taking guff from nobody.

Of course that was waaaaaay back in 1958 (to 1963), and most of us have probably never seen a single episode, but that isn’t stopping CBS from digging into the vault and resurrecting the property as a new series.  Chris Columbus is set to executive produce and direct the series.