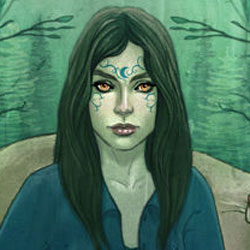 How many different kind of vampires are there? Dracula lurked in the shadows and had mastery over the beasts of the night, sparkly vampires flock to the Pacific Northwest to be all emo and seduce the unsuspecting, and then there are the vampyres of House of Night. They do drink blood, but except for some magical vampyre powers, they are pretty much like you and me. Or something like that… Previously in House of NIght: Seventeen year old Zoey Montgomery is going through the change. But unlike other fledglings, Zoey got a full vampyre mark and a bunch of other tattoos from the vampyre goddess, Nyx, who has named Zoey her eyes and ears at the Tulsa branch of the House of Night – the school for fledglings turning into full vampyres.

WHAT IN THE WHAT NOW?

I’m sure the House of Night book series by P.C. Cast and Kristen Cast explains the world of the vampyres in much more detail and covering the whole process of moving from fledgling to full vampyre, but in this translation of the story, all of that is lost. Instead of going through the motions, the reader is dropped into the middle of a story that takes place between scenes in the second book of the House of Night series. I know people say there is no need to start at the beginning, but a think a lot of people are going to be lost here as there is little build up or explanation as to why Zoey is such an important figure in this world’s lore.

While a bigger picture can be pieced together as the issue progresses, the entire picture isn’t going to be spelled out for you. The bulk of this issue has Zoey questioning her place in the world, diving into some vampyre lore, and coming up with an answer – namely that a good leader knows when to ask for help. It kind of feels like an After School Special wrapped in a world of shadows and mysticism.

It is very easy to fall in the trope of the emo vampire and Zoey skirts that line throughout this issue, with the woe is me attitude. There’s also quite a bit of bickering back and forth between Zoey and Aphrodite, the former head of the Dark Daughters, which comes off as petty and really does nothing to advance the story except to nail home the fact that these two don’t like each other much. On the plus side, Zoey does seem to have a cheery bunch of friends to keep her spirits up.

While the House of Night appears to be populated by an equal number of young men and women, the women are front and center in this issue, and in the hands of the artists, one will have to remember they are all underage. There is a little big of J. Scott Campbell, and Michael Turner in the character designs, and I like what I’m seeing on the page.

The coloring is superb in this issue. The gathering under the great oak tree really gives the feeling that this is taking place during a fall evening, and the way the colorists give the illusion that the firelight is illuminating the environment is spectacular. There is a trend to move from heavy inks to create shadows in a scene and on characters, to colored shadows, which ends up making the issue look like a bunch of animated cells.

If you read the credits portion closely, you’ll notice the print edition of the book is $1.00 while the digital edition is $1.99. The buck for the print price is one of those incentive deals to try and snag the passerby with the allure of a 22-page story for a dollar. The digital price will remain at $1.99 going forward, but the print edition will see a jump to $3.50 starting with issue #2.

BOTTOM LINE: GIVE IT A CHANCE

I’m counting the seconds before a HON fan pipes in with slings and barbs about writing a review over a book I know nothing about, and to them I say, that just proves the point. Dark Horse wants more people to read comics, and I’m sure there are a number of Buffy the Vampire Slayer fans who will pick up this book out of sheer interest. Likewise, the publishers of the prose book probably want to create new fans and have done the deal with Dark Horse in hopes of bringing in new readers. Unfortunately, by dropping the reader into the middle of the story from the second book in the series, it is going to be hard for the book to gain traction with new readers. That’s not to say there aren’t any positive points. The quest Zoey has started, coupled with the wonderful art, has me wanting to stick around for another issue or two. Maybe more of the backstory will be explained in future issue, but until then, I give House of Night #1 3.5 out of 5 Stars.