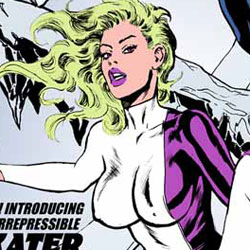 SOLICITATIONS: The Skater debuts in Champions #54

The newest star in the Heroic Publishing pantheon is the irrepressible SKATER, who makes her comic book debut this month in the pages of CHAMPIONS #54. Beginning in this issue of Heroic’s flagship CHAMPIONS title, Doctor Jimi Tucker dons her trademark purple-and-white costume, puts on a pair of ice skates, and sets out to do battle with the forces of evil, armed with powers over friction, momentum, and inertia that seemingly violate the fundamental laws of physics.

Following this initial adventure, by writer/creator Dennis Mallonee, with artists Andrew Pepoy and Jeff Brennan, the SKATER is on tap to appear in at least four more issues of CHAMPIONS. Her origin story is scheduled to appear in CHAMPIONS #57, with further adventures to follow in CHAMPIONS #60, 62, and 64.

Interestingly, although this is the Skater’s very first comic book appearance, she is in fact one of the oldest of Heroic Publishing’s stable of characters, with roots that date back to the early 1980s. Indeed, before the final decision was made to go with Flare, Icestar, and the several other characters who appeared in the original six-issue Champions mini-series published in the mid-1980s by Eclipse, the Skater was under serious consideration for a leading role. Now at last, twenty-five years later, in the pages of CHAMPIONS #54, the irrepressible SKATER finally makes her comic book debut!