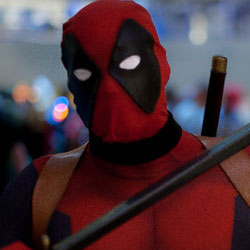 Each year, we take the time to chat it up with the Major Spoilers Costume Contest winner. It was a close race once again this year, as we had over 3,500 people vote for the best costume of the year.  When the final vote was cast, Clark Carruth came out on top with his Deadpool costume.   Without further ado, take the jump to find out more about the winner. How long have you been complying?
Clark Carruth:  I always comply so ED-209 doesn’t shoot me.  But I assume you meant “cosplaying”.  I worked at renaissance faires and constructed/wore costumes there in years past but I got into what most think of as costuming in 2009.  My girlfriend at the time wanted us to go to Dragon*con and wear costumes.  I wasn’t really into the idea but I told her if she made it, I’d wear it.  I costumed that year as Larry, Ben Stiller’s character from A Night at the Museum and Saul Tigh from Battlestar Galactica and I had lots of fun.  In the vendor room I found a couple of latex boffer katanas and thought, “These would make great Deadpool swords…”

What got you into the costume side of comics?
Clark:  I was a teenager/20-something in the 90’s and I was reading New Mutants/X-force, X-men and Image comics.  Deadpool made a big impression on me.  After discovering I enjoyed costuming it was a natural thing for me to move into costuming as Pool.  I’ve since costumed as Daken, Zombie Wolverine and Professor X.  I’ve learned that I really just want to wear Pool all the time so this year I’ve done variations on that.  I wore a mobster version of Pool(Deadpool in a bright red double-breasted suit with tommy gun) and a 300 Spartan version (red helmet with crest-like black mohawk, Deadpool belt and buckle, Spartan manties and a shield sporting a giant 3D version of the Deadpool symbol). Why did you pick Deadpool?
Clark:  I love the character. I hadn’t ever seen a Deadpool costume that looked like the vision I had in my head so I decided to make one for myself. In addition, I thought it was a good fit for me physically. I don’t particularly resemble any character facially and these days Deadpool isn’t drawn quite as McGuinness-gigantic.

Do you get help in designing and making your costume?
Clark:  I did. I knew I wanted something that resembled the Raimi Spider-man suit with a textured, shaded look rather than just straight spandex.  I learned that suit was created using a process called dye sublimation in which the suit is actually printed onto the spandex.  This requires a big expensive industrial printer so I had to get help.  I found a company called The Heroes Locker that produced dye-sub suits and contacted them about creating a Deadpool suit.  I designed the black eye pattern I wanted and they designed all of the other suit details and produced the actual suit.  I created the belt buckle, katana harness, sheaths, flash bangs and wrist/ankle/neck bands. Obviously I bought the SAW replica, Desert Eagle replicas and the katanas. This is the second year in a  row a Marvel character has won the contest, are you a big Marvel fan?
Clark:  I am a big Marvel guy. I grew up reading a footlocker full of hundreds of my dad’s old DC comics but in my teen years my preference switched to Marvel.  I’ve tried to get back into DC.  I’ve read the Sinestro Corps War, Darkest Night, Identity Crisis and Infinite Crisis all in the last year but I just haven’t found myself motivated to keep up with any DC books.  I currently read every Deadpool book, Daken, and Uncanny X-force. What are your favorite comic series at the moment?
Clark:  Of my current subscriptions, I probably read Uncanny X-force first when I get home with my stack of new comics.

Do you travel to a lot of conventions, or do you mostly stay in the Texas area?
Clark:  Dragon*con is pretty much my only convention.  This year I am going to try to attend San Diego Comic-con as well. Where can people see you next?
Clark:  Hopefully at SDCC!  I’ll have to prepare new SDCC-specific yellow though boxes.  :D