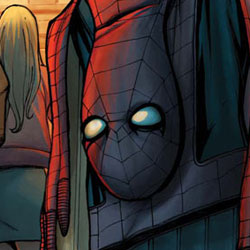 The terror of Spider Island is over. Parker has come out the hero once again, saving the entire city himself. People are starting to wake up and realize what happened. So what did happen? Find out after the jump. Previously in Amazing Spider-Man:Spidey has defeated the Queen, he single handedly delivered the cure to every resident of Manhattan, restoring them all to humanity, and now everyone’s naked.

As is appropriate for an epilogue, the entire story is pulling together the loose ends that were left behind in the wake of Spider-Island, and Slott handles it wonderfully. We open with everyone waking up naked (they lost their clothes while becoming giant spiders) and have some fun exchanges between the heroes that were changed, including some comments from Misty Knight about the arbitrariness of who woke up with what left, and a reminiscing from Herc. These first few pages deal with everyone who isn’t directly dealing with Peter, including the cleanup and one Miles Warren.  The rest of the book follows Peter as he deals with his own fall out.

We start with a typically fun exchange between Peter and MJ as she pokes the usual fun at him. We say goodbye to Jay and May Jameson as they finally leave New York for Boston. We see Kaine leave as well, heading for things that are less Spider-centric and away from the prying eyes of heroes looking for someone that has killed. Spidey gets called down by someone clearing a bridge just to tell him he’s a New Yorker and good people all of which are pulled off very naturally and with a good flow and pace. I did misspeak earlier, there is one more exchange not involving Peter, between JJJ and Robbie Robertson discussing how Spidey saved the city. It’s a good piece, with the JJJ begrudgingly acknowledging the hero and a well done page all around.

The rest is much more in depth and filling as Peter makes it back home to be confronted by his soon to be ex, Carlie. She’s breaking up with Spider-Man. It’s a very well done speech with Peter backpedaling and trying to explain things while Carlie points out how he’s ignoring the fact she’s packed and leaving. Of course this sends him after Dr. Strange who, thanks to a deal with the devil, cast a spell making it so only if Peter was unmasked could his identity be revealed. Again, Slott shows his understanding of many of the characters in the Marvel Universe and the seeds that he plants by having Strange point out Peters own mistake from the beginning of the outbreak. Another trip, another encounter, this time with Julia Carpenter, the current Madame Web, this is honestly the weakest part of the book, as she offers him the ability to cure himself of the Spider powers as well, which he turns down, of course. The final part ends where it started, Spidey takes the cure he had left to a still web-slinging MJ and provides the cure before she points out New York thanks him. It’s a cool display that is worth reading and I’m not going to spoil it here.

When I first opened the book I had not realized that we had changed from Ramos and I was sorely disappointed. That has since changed. Caselli has a much more subdued and honestly, more realistic. Ramos is far and away my favorite Spidey artist, but Caselli’s style was much more suited to the aftermath story here and played very well after the very action oriented final fight. He has an eye for detail and many of the scenes were that much better for it. I could go over this book hundreds of times and not find a single thing I dislike with the artwork, it’s just that good.

BOTTOM LINE: Why don’t you have it yet?

I have no complaints about this book. Dan Slott knows how to tell a story and Caselli can give me pictures of whatever he wants. Amazing Spider-Man 673, the close of Spider-Island, gets a very well deserved 5 out of 5 stars.
And while we’re at it, Spider-Island as a whole deserves a quick rating too. The story was good, no great, scratch that AMAZING, look up for how I feel about Ramos, and everything came together perfectly in the end. Spider-Island as a whole also receives a 5 of 5 from this Spidey fan.