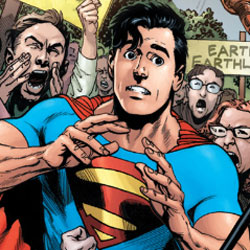 Superman may be the protector of the City of Tomorrow, but can he save the world today? And what does he do when the citizens turn against the one who wants to protect them all? Previously in Action Comics: Having been captured by the military thanks to a devious scheme by Lex Luthor, Superman escapes his confines after enduring all manner of torture at the hands of his captors.

FINDING HIS WAY IN THE WORLD

The issue kicks off with a look at the final days of Krypton, when the Terminauts begins sampling the population for storage. I don’t know if Brainiac is being replaced with this Terminaut, but the alien entity pops up again at the end of the issue when machines and technology are once again taken over. That will spell big trouble for Superman (and turns the tables on the Metallo/John Corbin origin story as well).

But before any of that happens, the bulk of the issue is spent with the revelation that Superman’s assault on Glen Glenmorgan has backfired, and the media mogul is using the power of the press to turn the citizenry against the hero. Even something as simple as rescuing a girl about to be run down by a truck turns into an ugly mob scene, and pushes Clark to the brink of giving up the heroing business. There’s also an interesting moment where Clark’s landlady discovers his secret. That moment doesn’t play out to the full conclusion, which is disappointing, but it should allow for more story moments down the road.

For some reason, the story feels more rushed than it should, and certain scenes seem forced, while others seem cut short. With the brouhaha around the death of Krypto and the six legged goat seen in issue #2, the one panel exchange Clark has with a homeless woman who exclaims a white ghost dog is watching over him seems like something fitted in as a reaction, rather than a natural part of the story. Overall, I like what Morrison presented to the reader this issue, but the feeling of editorial meddling is present.

THE ART OF TWO WORLDS

It’s always risky when you mix artists in a single issue, but Rags Morales keeps things grounded by providing the art for the real world, while Gene Ha delivers up a unique look at Krypton in Clark’s dream. I really like Ha’s interpretation of the clothing and architecture of Krypton – it’s a modern interpretation of the Deco period that still makes everything seem futuristic.

On the Morales side, I still like how Rags keeps Clark looking meek and abused, while Superman is clean and strong. There may be an underlying message from Morrison on the view of the alien (clean and good) vs. humans who generally come off as dirty looking.

I understand DC’s desire to make the general public think that they are really concerned about prices. Action Comics #3 features a $3.99 cover price for 20 pages of story and 8 pages of supplemental content that gives a behind the scenes look at the rest of the Superman books the company publishes. I could care less about the bonus content, I’m here for the story of Superman, and that page to price ratio is pushing the limit. I like what Grant Morrison is serving up; there are interesting twists to the old myths and the art by Rags Morales continues to rock. I want to see how one man (albiet a super man) defends the planet from a real alien menace, when the entire populace of Krypton couldn’t do it. I want to see Morrison take the Superman mythos to a whole new level, but by “holding the line at $2.99” with a $3.99 book, I’m not sure I’m going to continue much longer. The story is fantastic, but the cover price should give you pause, and ultimately hurts the overall rating of the issue. Action Comics #3 earns 4 out of 5 Stars.