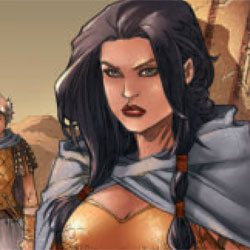 With the city under siege, it is up to seven warriors to escort the prince to safety. But danger lurks behind every curtain in the latest offering from BOOM! Studios. Previously in Seven Warriors: Well, there isn’t anything before this issue because it is the first one, but it is part of the bigger seven series that we’ve seen before. The rules of the seven are simple – assemble a group to go on a crazy mission, but there must be seven of them. That does not mean all will survive…

A TALE OF MANY APOSTROPHES

Long ago in the Lybian desert, the Persians and the Byzantine armies began their siege of the tiny capitol of N’Nas Amon. The city will fall, and with it the royal lineage will die. That is when Queen Tsin’Inan hires six Sarmatians to escort the prince (for a total of seven) to the hidden city of Jabbaren where he will hook up with highborn women of the kingdom and procreate like there is no tomorrow.

The premise is a solid one, but the execution is a bit awkward. I don’t know if this is a result of the translation, but there seems to be far too many words used to tell the reader what is going on. My understanding is that this series was originally released as one graphic novel, so some of the plot points and the issue cliffhanger seem jumbled as well. It takes a while to get to the revelation that the prince is getting it on with a lowly maiden (though the opening page sex scene pretty much tells you everything), and elements like the full body search of the warriors and their subsequent drugging doesn’t make a lot of sense at this point. I’m sure these details will be expanded upon and questions will be answered, but overall the story is bogged down with details that in this format are disappointing.

It shouldn’t come as a big surprise that not all the warriors are going to get out alive, and sure enough before the issue closes, one goes down in a blaze of gory, and the revelation of what a sister wife means comes to the surface.

Francis Manapul has been high on my list of favorite artists since I first saw his work on Witchblade back in the day. This issue takes his art back a few years to 2008 where readers will see a strong similarity between his and Michael Turner’s style. While some may not like the sharp noses, perfect forms on all the characters, and long necks, Manapul makes it work to great effect in the pages of this issue.

One other thing that will jump out at readers is the page layout. Instead of the four to six panels per page we’ve become accustomed to, this follows a format of 7-9 panels per page. It means the individual panels are smaller, but they are still packed with detail and information. You also won’t see overlapping panels in this book, which gives everything an odd formal feeling.

Even though there are a number of disappointing moments in this issue, the art and overall story are very interesting. I want to see what happens in the next issue, but if it feels just as chopped up as this issue does, I’m going to have to track down the original graphic novel (and then learn a new language) in order to appreciate everything in one big read. The art is fantastic, by far the best I’ve seen this week, and makes the issue worth picking for that alone. Seven Warriors #1 has a rough start, but still worth 3.5 out of 5 Stars.