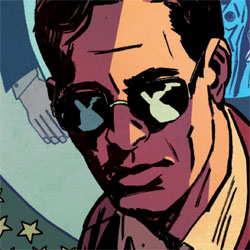 What happens when a money launderer gets his hands on more money than he’s ever had, and it has the mob, the IRS, and everyone and his brother after it? Cooler head prevail in the latest installment from BOOM! Studios. Previously in The Rinse: Jeff Sinclair is a money launderer – some say the best one there is, but with a big score mere moments away, the IRS and casino henchmen who want their boss’s money back have the heat turned way up. Quick wit and a gimmick or two have saved Jeff already, but it’s unclear when his luck will run out.

Steve Maxon isn’t happy that one of his guys skimmed money from the funds he skimmed from his mob bosses, and that continues to be the focus of the series – will the bad guy win, or will Sinclair turn the money around and clean it before anyone notices. While previous issues have focused on Jeff Sinclair’s ability to sweet talk his way out of any situation and his ability to stay two steps ahead of his pursuers, this issue focuses more on the casino thugs and the IRS hottie who want the money. Time and time again, Sinclair seems to be ahead of the curve, but each time his adversaries are mere moments behind him. That’s good for the hero, but as the story reaches the climax, the reader knows Sinclair will be in the line of fire by the middle of the third act.

Giving a lot of face time to the thugs is a pretty smart move by Phillips. Previously, the duo came across as a bumbling pair, but this issues seems their ruthless and violent side emerge. Whether it is threatening to cut off the fingers of one of Jeff’s old high school friends looking for information, or throwing a Molotov cocktail in the lap of a legless veteran, these two are set in getting the information they want regardless of the consequences. And with IRS agent Delia Dash on the case, things are only going to get more interesting. Of all the characters in this story, she’s the one that seems the most off. She is set in closing the case, but because she doesn’t have any real evidence against our hero, she opts to play it coy, often flirting with Sinclair rather than pressing him for the answers (and money) she seeks.

It’s a fast paced tale with a lot more action than we’ve seen before. There are some interesting twists, but one of the biggest drawbacks is the number of characters that pop in and out with no real explanation as to their role in the story. Perhaps they’ll reappear later to save the day, but for now, it seems like something that could have been cut.

Mark Laming continues to provide interesting art for this series that reminds me Queen and Country if it had been in color. It’s an interesting blend between the house style and the work of Steve Rolston, and I like it. There are a few times when characters start looking like each other, and with the color palate used, it is easy to confuse one character for another.

BOTTOM LINE: IN FOR THE HAUL

If you picked up the first two issues in this series, you might as well go for the third issue as well. There is a bit more character development for the villains and the unsavory characters who got Jeff into this mess, but overall this issue feels like a third issue – the feeling of grinding to stretch things out. The Rinse is a very good story, and if this were a pitch for a movie, it would be perfect if done in the style of Smokin’ Aces. The plot continues to build, with a couple of revelations that should pay off next issue, but overall, The Rinse #3 earns 3 out of 5 Stars.