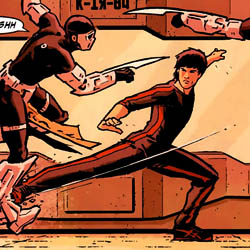 Or – “Two Great Tastes That Taste Great Together…”

Put ’em together, add a dash of Shang-Chi, and you just sold me a comic book, sirrah… Previously, in Secret Avengers:  A mysterious underground organization known as The Shadow Council has been operating behind the scenes in the Marvel Universe for decades, unnoticed until Steve Rogers took over the post of superhuman-mucky-muck-whatever-it-is-he-does-there.  In recent months, they tried to revive the legendary Fu Manchu, and were opposed by Steve Rogers and his secret black ops team, including Fu-Fu’s bouncing baby boy, the man known as Shang-Chi, the Master of Kung Fu.  (Not to be confused with Shang Fu, Master of Tai Chi.)  Now, Commander Rogers has a lead on the Shadow Council’s activities, and has called upon Shang for assistance a second time…

THREE CHARACTERS IN SEARCH OF A UNIVERSE.

We open in media res, with Commander Rogers radioing the Master of Kung-Fu to warn him that the army of the Shadow Council are nearly upon him.  For nearly a page, Shang-Chi stands unmoving, centering his chi, until he suddenly EXPLODES into three-dimensional action.  David Aja (whom many may remember from his work on Immortal Iron Fist not so long ago) delivers on two fascinating visual premises at the same time:  The Master Of Kung-Fu versus a hundred men, and a space-station that seems to have been designed by M.C. Escher.  Flashback to Hank McCoy, the Secret Avengers tech wizard, explaining a bit of Warren Ellis frammistatery (“mining transmatter from bad continua”) to explain the plot, but what it really boils down to is three amazing martial artists fighting in a twisted landscape (though Sharon Carter cheats a bit by arming herself with Baron Strucker’s epic Satan Claw) and looking awesome.

GAMES OF DECEIT AND DEATH…

The moment of the issue comes when the team reunites in mid-space-station, wherein Shang-Chi dressed down Cap (!!) for the situation:  “I came to aid you in a mission of stealth, extraction and honor avenged.  I resent being made your thug.”  It’s the clearest and most insightful single character moment in recent memory, distilling Shang’s distaste for the spy game as seen in his long interactions with Black Jack Tarr, Denis Nayland Smith and such throughout the 1970’s.  The battle is amazingly well-rendered, and Cap even gets to apologize to Shang by reminding him that “you’re here to be an Avenger,” and my love of this issue grows as the villain is revealed to be an imperfect lost clone of Arnim Zola, and we bring things full circle as the heroes capture a Shadow Council ship and return to Earth.  There’s a real Jim Steranko influence in this issue, especially in a sequence where Commander Rogers gets blasted through a strange dimensional void.

Warren Ellis can always be counted on for a strange bit of MacGuffin magic, but this issue pushes it up to eleven, giving us a very close-up view of a very small three-man operation, giving the Secret Avengers something that the first few issues seemed to lack:  a clear purpose and strategy.  Under Brubaker (and don’t get me wrong, the book was good) there was no real differentiation between this team and the other Avengers branches, but Warren sets these issues aside with a wonderful opening sentence:  “There are missions that no one will ever find out about.  Unless they lose…”  Secret Avengers #18 is an uncomplicated but attractive issue, hitting all cylinders in both writing and art, featuring a character in the midst of a well-deserved but somewhat unexpected renaissance, earning 5 out of 5 stars overall.  It’s just that fine a comic book, folks…

Faithful Spoilerite Question Of The Day:  With Shang-Chi once again all over the place in the Marvel U (not to mention Nova, Power Man, Ms. Marvel, Iron Fist, Valkyrie, et al,) can you even think of any 1970’s characters left who haven’t been successfully revived?