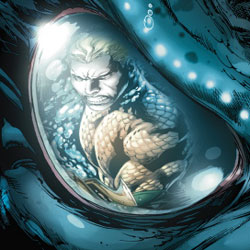 The King of the Sea came out of nowhere and turned readers’ minds around about the hero from the deep. The second installment has arrived, and everyone is wondering if this issue continues to bring Aquaman to the front of the hero line. Previously in Aquaman: Aquaman has taken a lot of crap over the years, turning him into the laughing joke of the superhero world. As DC relaunched the universe, Aquaman takes the jokes and ribbing in stride, and goes so far as to set the record straight on what he can, and can’t do. Meanwhile, something has awakened deep beneath the ocean’s surface.

HORROR FROM THE DEEP

Last issue, something horrifying broke free and made its way to the surface, and these mean, ugly, nasties are hungry – really hungry. Once they discover that humans taste like pork, it’s just a matter of time before the reach a small coastal community and gather up the locals to stock their pantries. When the locals come up with more questions than answers, a deputy takes it upon himself to find Aquaman and bring him in to the story.

Once again, Johns does his best to use the “lame” bits of Aquaman’s character as a way to make the character more interesting. And while it does work once again, it takes far too long for this issue to find traction. By the time Aquaman and Mera (don’t call her Aquawoman) arrive on the scene, and get into the big fight with the monsters from the deep, the issue is over. I enjoyed what I read, but unlike Justice League, I was left with a feeling of “This is it?” I’m guessing this is a six issue arc, but if the next issue doesn’t kick a little sooner, I think readers are going to leave out of frustration.

Ivan Reis does an excellent job of bringing the page to life. When readers see the little boy pointing at the ship approaching the dock, and getting giddy over seeing his father, Reis draws the boys innocent look so well, the anxiety level of the reader increases because we know the horror is about to follow. And even though this is a T for Teen rated book, Reis doesn’t hold back on the violence when the monsters get their comeuppance at the hands of Aquaman and Mera.

I also like how Reis draws Aquaman as a very strong character. Even though he isn’t as strong as Superman, and probably not as smart as Batman, his strength and youth come across the page, and one can see the energy just waiting to be unleashed by the hero.

Some writers do a great job of story decompression. Geoff Johns is a writer who seems to be hit and miss when it comes to stretching a story out. While there is a lot of action in this issue, the character development is almost nonexistent and the overall stories feels like it is spinning its wheels. The art is great, but the story is just so-so, earning Aquaman #2 3.5 Stars out of 5.