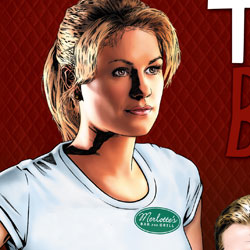 Since the first issue launched in July of 2010, the TRUE BLOOD comic books have become one of IDW Publishing’s most popular titles.  Fans of the hit HBO show were excited to have new, unique stories featuring their favorite characters.  In an effort to give Truebies what they crave – more Sookie, Bill and Eric – continuously through the year, IDW and HBO will launch the first-ever ongoing TRUE BLOOD comic series in spring 2012, featuring new series installments each month.

“The comics are a great way to continue telling True Blood stories off screen,” said show creator, Alan Ball. “With this new ongoing series, Truebies will be able to find a new comic in stores every month. We’ll also have even more room to create in-depth drama and further explore the world of Bon Temps.”

Added IDW chief operations officer, Greg Goldstein, “IDW could not be happier than to move to this next step with our HBO partners. Since we originally launched TRUE BLOOD comics in 2010, fans have been asking for an ongoing series, and we’re happy to be able to work with HBO and offer it.”

Following on the success of the New York Times best-selling first comic collection, TRUE BLOOD: ALL TOGETHER NOW, IDW and HBO launched the second edition TRUE BLOOD: TAINTED LOVE. In this twisted tale, co-written by True Blood actor Michael McMillian and comic mainstay Marc Andreyko, Jessica is exposed to contaminated bottles of Tru Blood, causing the lovely vampire to go berserk. It’s up to Sookie, Bill, Eric and the rest of the Bon Temps gang to figure out who (or what) is behind the bad Blood. Plus, Reverend Newlin is back and as always in the world of True Blood, things are not as they seem. Both TRUE BLOOD: ALL TOGETHER NOW and TRUE BLOOD: TAINTED LOVE are currently available in comic and book stores, and through the Apple iTunes and iBooks stores.

IDW’s third TRUE BLOOD comic series, TRUE BLOOD: THE FRENCH QUARTER is a monthly comic series currently available in stores and will be available as a collection in March 2012. THE FRENCH QUARTER finds Sookie and Eric in New Orleans tracking a killer, whom Eric and Godric thought they killed in Paris more than 200 years ago, while Bill is in town investigating a local Hep-D outbreak that may be connected to the killer’s latest victims. Meanwhile, back in Bon Temps, Trubies will wonder why Pam is hanging out at Merlotte’s and what it is she wants with Lafayette. About HBO Licensing & Retail
HBO Licensing & Retail officially licenses the HBO® brand for the development and merchandising of innovative product lines inspired by the network’s award-winning programming.  With products created around classic series like the The Sopranos® and Sex and the City® to current hits like True Blood®.  True Blood products include the luxury handbag line Hammitt for True Blood, tarte for True Blood makeup collection, the Tru Blood Beverage in the original glass and new plastic bottle, a high-end headphone line V-MODA for True Blood as well as fashion apparel, jewelry, glassware, digital and CD soundtracks.  Merchandise can be purchased in retail stores nationwide, at http://store.hbo.com, and at the groundbreaking HBO retail hub, the HBO Shop®, located at 42nd and 6th Avenue in New York City.  HBO Licensing & Retail products are also sold internationally across Europe, Asia and Australia.