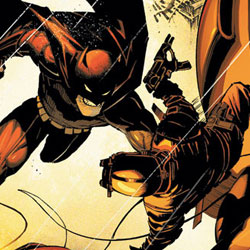 The Court of Owls is make believe. Or at least that is what Bruce Wayne thinks… until one of them shows up to kill him. Previously in Batman: Bruce Wayne wants to rebuild Gotham City to bring commerce and industry back to the city that was once a shining spot on the nation. But with great wealth, power, and influence, someone is going to kill you… and Bruce Wayne  has only 24 hours left to live.

Batman is prepared for anything, all the time, because he is better than you, me, the guy who wears his underwear on the outside – everyone. Because of this, there is nothing that can get the drop on him, and he has an out for every situation. When the kidnappers try to throw their hostages out of a flying helicopter, Batman is there to stop them in a way that only Batman (or John McClane) can. When a body turns up with Nightwing’s DNA under his fingernails, Batman doesn’t need to hear Nightwing explain how that happened, because he already watched the surveillance tapes and put two and two together. And when an unstoppable force attacks Bruce Wayne, shoving him out of a window atop Wayne Tower, Batman knows just the right place to land to prevent himself from dying.

But Batman doesn’t know who the Court of Owls are… yet.

Snyder takes everything wonderful and great about Batman and Bruce Wayne and shoves it between the cover, conjuring up a tale that is nothing less than a fun read. Yes, there are some who are going to roll their eyes so hard that people in the next county are going to hear it, but in this New 52, DC isn’t worried about those who have read Batman for years. Heck, the company isn’t even worried about those who think they’ve been reading Batman for years and have placed the character in the Waste of Paper category. DC is going for the new reader, and if you are going to bring in the new reader, you’re going to need to give them a lot of action, a lot of mystery, and a lot of pretty art. This issue has all of that.

I’m a sucker for environment building. When I really enjoy a character, I want to know what influences the character, how the city housing the base of operations works, and what caused the landscape to become something that needs protecting. This is why the history around Wayne Tower is interesting to me. Of course, the mythos is the product of the writer’s mind, and as different writers take on a character, that landscape can change drastically. Since DC is wiping the slate clean (more or less) in this new universe, it would be in the company’s best interest to invest in some technology that lays out the city (Gotham, Central City, Star City, Metropolis, and so on) in detail and allows/forces other artists to use that when setting up a scene. I believe Freddie Williams III has a library of locations in his digital library that he can pull up at any time, and something like this expanded for the DCU could do wonders for universe building.  If Marvel can reference real places in NYC, shouldn’t there be some continuity in locations and settings in the DCU?

Greg Capullo once again delivers some really great action on the page that is simply wonderful. I don’t mind the flattened noses, of the times when you realize the skeletal structure of a real human couldn’t or wouldn’t allow some of the things seen on the page, but I forgive all of that because it looks so pretty when executed.

Of all the Batman titles that have been released, Batman is the one that seems to have grabbed my attention. I don’t care about Batman and Catwoman getting it on, the Joker getting his face cut off by a bunch of Silent Hill rejects does nothing for me. The Brat and the Bat never set well with me, and Nightwing is just this guy, ya know? Batman serves up the big action and thrills one wants from a Batman title, and includes a bit of everything else. I hope Snyder isn’t telegraphing the big bad the same way Morrison did Black Glove, or Loeb did with Hush. I hope Lincoln March is that character that is nothing more than a recurring character thrown in to throw off the reader, and I hope Capullo’s art continues to shine. For now Batman continues to deliver an issue that is as good as the last, earning Batman #2 4 out of 5 Stars.