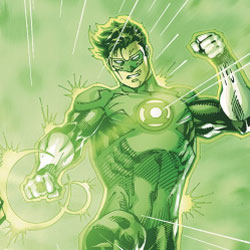 The road to team building is a long, hard one, and Geoff Johns and Jim Lee are taking their sweet time. Previously in Justice League: Strange monster aliens are trying to blow up buildings around the world, but Batman and Green Lantern – teaming together for the first time, put a stop to one of the attacks. With the alien gone, the only clue left behind is a strange box that continues to emit pinging sounds. When confronted with an alien device, why not go to the closest alien they know? With the military hot on their tale, the duo come face to face with Superman.

The thing that is probably the most troubling for fans is how long it is taking Johns to get this team of heroes together. This issue features a lot of punchy-punching, and fighty-fighting which seems to the method of interaction anytime heroes meet for the first time. That being said, every effort is made to bring the fighting to an end as quickly as possible, even if it means getting The Flash in on the act.

What I really like about this issue is not the big fight scenes, but those moments involving Barry and Hal. While this may be the first time these heroes have assembled for the greater good, there is a clear indication that The Flash and Green Lantern have teamed up previously to stop Gorilla Grodd – with disastrous results, which has caused the entire police force of Central City to target The Flash for investigation. Yes, the superhero paranoia is running high during this time period in the DC Universe, which is an interesting angle to explore in this world.

When the duo finally becomes a quartet and visit Superman’s Fortress of Print Media (presumably one of The Daily Planet’s print shops) all hell breaks loose when the boxes are revealed to be Mother Boxes ejecting a slew of Parademons on the unsuspecting heroes. And for those wondering how Victor Stone gets turned into Cyborg, let’s just say Star Labs and Victor’s dad get an unpleasant surprise when the Motherbox opens full force with Vic caught in the crossfire.

From the story perspective, Johns hits on all the tropes one expects in the formation of a superhero team, and makes it work. Ever since Frank Miller pitted Superman and Batman against one another, fans have wanted more and more realistic fisticuffs between the big two of the DCU, and Johns is certainly giving a lot of fan service in this second installment.

Say what you will about Jim Lee, but his art is jaw dropping in its execution. Lee understands the human figure, he understands architecture, he understands that you can’t simply fill a panel with a character and nothing else, and expect it to sell. Every page and every panel is filled with detail, and it sucks you into this make believe world and makes it seem more realistic.

On the downside, Lee does tend to favor the big splash pages and extra large panels, which does two things; first, it means Lee can deliver pages on time, and second, it tends to slow down the pace of the storytelling and draws the story out longer than I think the traditional reader wants.

I’m sold on the New DCU. I like this story as an alternate to the ones we’ve read before, and though a great deal of the plot points have been done before, this creative team makes it seem fresh. Those who jumped on board the first issue aren’t going to be disappointed in the next chapter to the mystery that is served up, though many might be frustrated by the pace it is being presented. Overall, Justice League #2 is worth picking up, and earns 4 out of 5 Stars.