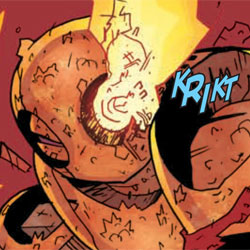 When you are changing the design of a character there are two ways you can go about it. For the Atomic Robo Crew, it looks like they chose the natural/good way. Previously in Atomic Robo: The Ghost of Station X: Atomic Robo and the Action Scientists are scrambled to save a failing mission in space. There’s very little time, and a very high risk to those involved (namely Atomic Robo). Meanwhile, a building that has no name, and no address, has turned up missing, and that is only part of the mystery…

Artist Scott Wegener freaked me out a few months ago, when he announced he was changing up Atomic Robo’s look and design to match his changing style. When an artist makes an announcement like that, it usually turns into some forced hack-job that no one likes, but is the de facto standard because no one can think of an alternative. There’s also some contrived story forced around the costume change that makes little sense, but again, it’s done to feature the new look of the character. Fortunately, Clevinger and Wegener don’t fall into that trap in introducing readers to the new Atomic Robo.

After being hit by a spy satellite, Robo free-falls to Earth, and as we’ve seen in a number of space films, Robo’s body heats up and starts breaking apart. If it wasn’t for the fast thinking of his launch crew, the title character may be lost forever… which would be kind of odd, since this is the second in a five issue arc, and killing the title character as the success rocket of the character continues to climb is like shooting yourself in the foot before running a marathon. Anyway… what follows is a sequence that combines the best bits of RoboCop, The Six Million Dollar Man, and MASH to create a humor driven piece that leads naturally to Robo’s new outer shell.

Once shots of naked robot ass and jokes about open gowns is out of the way, the real business of the issue comes to light – NASA never asked Tesladyne to save anyone in space. In fact, the astronauts were no where near the coordinates Robo and the Action Scientists flew to… DUN DUN DUUUUUUNNNN! As far as we know there isn’t a silly dinosaur, monster from beyond space and time, or vampires from another dimension causing problems. Instead, the belief that a mysterious group is pulling strings to make buildings disappear and off Tesla’s greatest creation is a great twist in the plot that changes the very nature of what we have come to expect.

A NEW LOOK, A NEW DIRECTION

As the story moves in a new direction, likewise the art by Wegener continues to pop on the page. Yes, Robo’s look is similar to what we’ve seen before, but the sleek design does follow Wegener’s evolving style. And while I usually complain about panels filled with a single color, instead of detail from the environment, the art crew uses the blank space to add mottling to give the illusion of detail where there isn’t any. It’s weird to see it, but in this day of computer generated coloring, it works, and works well once again.

I went into the issue expecting page after page of funny comments and zany action, but what I came away with was something that ended with a serious somber tone. The paranoia filled mood that ends the issue pulls you in a different direction, and hopefully this is the direction the creators will take the character through the rest of this series and beyond. A great second chapter in this serial earns Atomic Robo: The Ghost of Station X 5 out of 5 Stars.