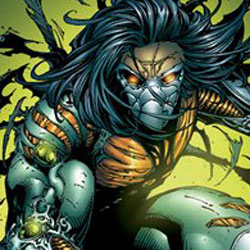 The Darkness gets new writer in 2012

Top Cow Productions is proud to announce the addition of acclaimed writer David Hine (THE BULLETPROOF COFFIN, Batman) to the stable of talented stewards of the Top Cow Universe. Beginning in March 2012, Hine brings his considerable experience to torturing one of comics’ favorite bad boys, Jackie Estacado. David joins Detective Comics creative partner, Jeremy Haun (ARTIFACTS, PILOT SEASON: THE BEAUTY) as the ongoing team on THE DARKNESS beginning with issue #101.

“From issue # 101, I’ll be the regular writer on THE DARKNESS, one of the best and longest-running independent books out there. I’ll be teamed with Jeremy Haun, one of the most talented artists I’ve worked with. And I’m dreading it!” said Hine. “To write a character like Jackie Estacado you have to go into some very dark and ugly places on a daily basis. It’s a tough job, but someone has to do it…”

“I couldn’t have been more excited when I found out we were able to get David on THE DARKNESS long term. He is one of those writers that perfectly balances story with character. He understands the inner workings of his characters and really knows how to tap into their darkness, if you’ll forgive the pun,” explained Hine’s collaborator, Jeremy Haun. “I’ve wanted to have an extended run on a series for years now, THE DARKNESS is the perfect place for me to do that. David and I are working hard to build a story that is true to the property, but at the same time, really kicks up the horror elements of the book.”

Hine takes over the writing duties from the long time writer Phil Hester (Green Hornet, Wonder Woman), who has written the series since 2007, when the series relaunched following the events of FIRST BORN and the release of THE DARKNESS video game. Hine has previously written the titular character of Jackie Estacado in 2010’s limited series THE DARKNESS: FOUR HORSEMEN, which garnered rave reviews. With Hester concluding his run on the series with the landmark issue #100 and The Darkness II slated for release in February, the time was perfect for a fresh voice to embrace THE DARKNESS. The team of Hine and Haun will pick up the story of Jackie Estacado after the events of ARTIFACTS #13, which Top Cow promises will alter the status quo of the Top Cow Universe irrevocably. Joining the already announced teams of Tim Seeley (HACK/SLASH) and Diego Bernard (The Man With No Name) on WITCHBLADE and Ron Marz (MAGDALENA, VOODOO) and Stjepan Sejic (WITCHBLADE) on the ARTIFACTS ongoing series, the two will help guide one of Top Cow’s flagship franchises into a new era perfect for longtime, lapsed, and new readers alike.