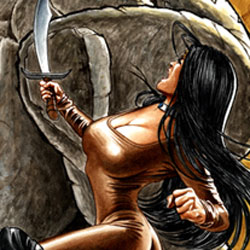 KOLCHAK and the LOST WORLD

From the author of the Brooklyn Knights novels!

After getting a serial killer to confess, Kolchak is offered an
international assignment with massive coverage around the world. With fame and fortune finally within reach, Kolchak is ready to cover the story, when he’s confronted by a mysterious monk who warns him that “the seventy-two must always be.”

What this means is not explained. But, before he knows it, Kolchak’s dreams are invaded by unexplainable images that let him know every step he takes toward this story is bringing him closer to death. From out of the past comes a mysterious killer systematically murdering
anyone with a connection to the Masked Rider of the Plains former identity.
When all signs point to Butch Cavendish, a man long dead, The Ranger finds
himself trapped in a deadly game of cat and mouse with the life of his faithful Indian companion hanging in the balance. THE JUSTICE MACHINE IS BACK! The legendary super-team returns on the 30th anniversary of their 1981 debut!
The Justice Machine fought to destroy tyranny on two worlds–but nearly twenty years ago they vanished, never to be seen again.
Until now! The Machine’s explosive return plunges them into a nightmarish landscape of
two realities warring for dominion! The team races to thwart a dark
destiny awaiting all humanity if they fail to stop an unspeakable
evil from gaining a foothold to the future! The Eye of Ancev was within their grasp but then disaster struck. The Eretradium mercenaries made off with the artifact, but there are more pressing issues to deal with: will Valerius and his motley crew find a way to free themselves before the Temple of Neak Prei crushes the life out of the them?
Moonstone presents a creator-owned effort from Mark Sparacio (Captain Action, Jonah Hex) and newcomers Ian Ng and Abe Melendez, in full color.
Two Covers (50/50 split)