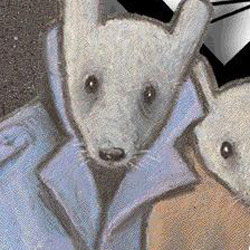 Marking the 25th Anniversary of Pulitzer winning Maus, author Art Spiegelman and Pantheon Books have published METAMAUS; a multi-media exploration of the creative and historical content behind the making of the cult-classic, graphic novel. METAMAUS includes the DVD, produced by 8 Leaf Digital Productions, that provides access to an extensive archive of audio interviews with Spiegelman’s Holocaust survivor father, historical documents, and a wealth of the author’s private notebooks and sketches.

METAMAUS re-enters Maus, the graphic novel that has altered how we see literature, comics, and the Holocaust. A literary cannon alongside the likes of Anne Frank, Maus tell the biographical story of Art Spiegelman’s father, Vladek, and how he and Spiegelman’s mother, Anja, survived the Nazi occupation of Poland, first in hiding, and then at Auschwitz.

“The first time you hear Vladek’s voice, the whirring of his stationary bike in the background, it’s like falling through a mineshaft of time. You are there with Spiegelman listening to this story. As poignant as Maus is, the DVD adds a new dimension,” shared Ryan Nadel, Founder, 8 Leaf Digital Productions, who worked closely with Spiegelman for over a year on the creation of the multi-media companion of METAMAUS.

In METAMAUS, Spiegelman probes the questions that Maus most often evokes -Why the Holocaust? Why mice? Why comics? Spiegelman’s illustrations have been praised for their ability to break down the emotional barriers to the tragic story of the Holocaust; making this graphic novel produced twenty-five years ago still relevant today. Nadel saw his work on METAMAUS as a chance to embody the important role digital media plays in repackaging artifacts of the past and giving them new life. “I was faced with the challenge of bridging the gap for Spiegelman of translating his vision into code and creating an interactive work that lived up to his aesthetic and visual rigour. Ultimately, we were driven by the sense of preservation that digital form offers: the DVD is more than just a deeper look into the book, it offers the ability to share these images, the artifacts of Maus, in a way that can be explored and that won’t fade or get lost. This is all the more important, as the task of remembering the Holocaust falls to generations that didn’t experience it.”

8 Leaf Digital Productions is an innovative digital media agency that combines both content and application sides of digital projects, from learning platforms, to iPhone applications, and alternate reality games for the likes of the US Department of Energy, Vancouver Olympic Committee, and Pacific Wild. Most recently they have completed the digitization of METAMAUS in collaboration with Random House/Pantheon and Pulitzer-winner, novelist Art Spiegelman.